Actually it is not far anymore. I probably overestimated the rest of the way and my plane doesn’t leave Pula until Thursday. So I still have a lot of time. And I take it in the morning so that the sun has a chance to take the wet night from the tent before I pack it up. A few kilometres later I am standing at the karst edge at Črni Kal and see the sea! The second one of my journey! From here it descends rapidly towards the coast. But the wind is also coming towards me now and it tastes – or is it just my imagination? – a little salty. 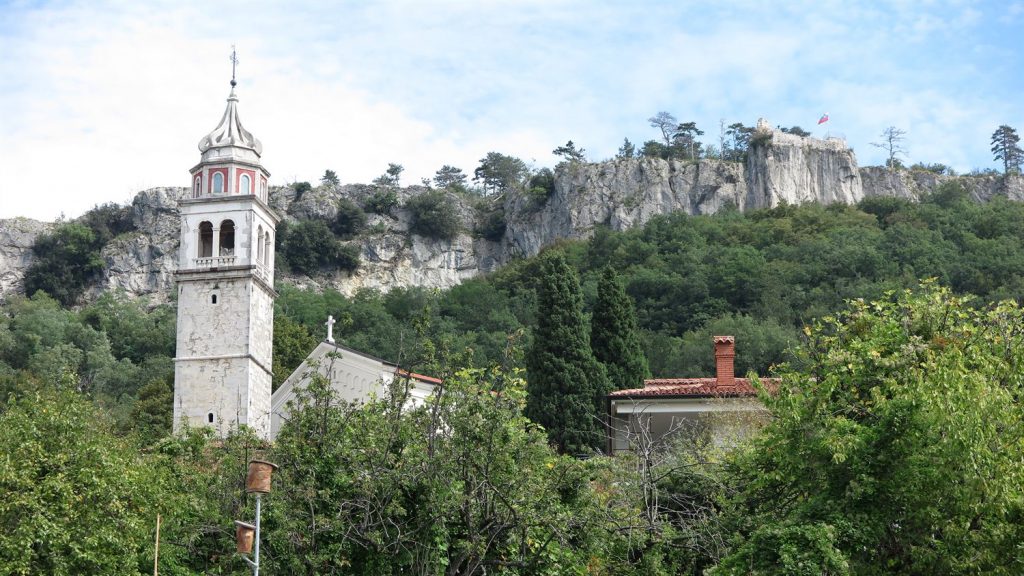 On the way I always meet the two Belarussians again, who arrived yesterday in the dark on the campground and are on their way from the Czech Republic to Croatia, also with their bikes. Sometimes I overtake them, sometimes they overtake me. And we always exchange a few short words in English. While I am taking another photo break, they stop and give me a postcard from Minsk with a personal dedication as a reminder of our encounter! Andrei and Nicolas: I would be happy to see you again, I think we still have a lot to tell! 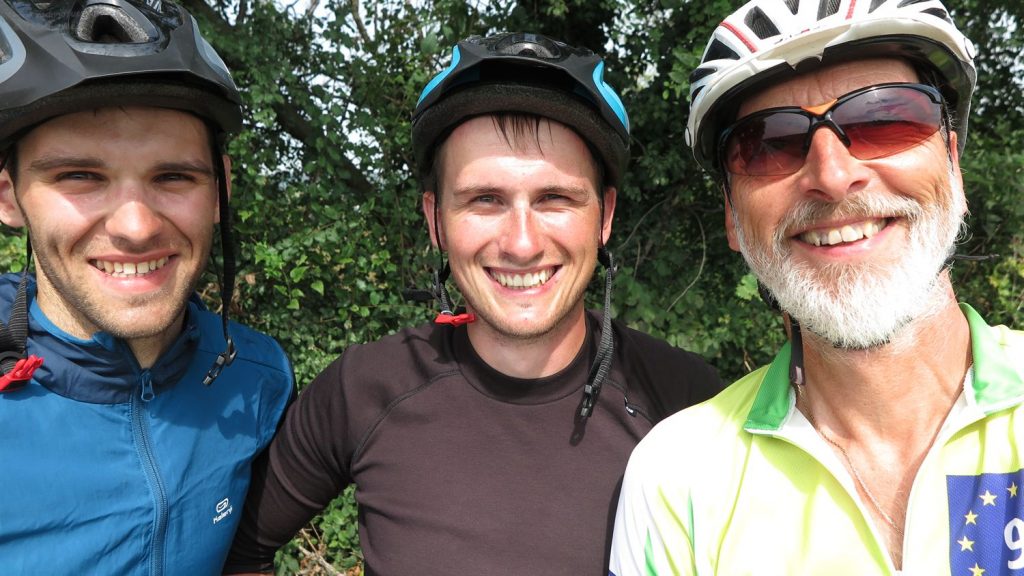 With Nicolas and Andrei

In between I reached Parenzana, a former railway line from Trieste to Poreč (in Italian: Parenza). And at least here it has a quality that I haven’t found on the whole EV 9 yet: Perfectly marked, asphalted and car-free. Only the small motos, which are also on the way on this officially cyclists and pedestrians reserved way, annoy. In addition to the noise, they leave behind the stench of their two-stroke mixture, which is particularly persistent in the incisions and the two tunnels that follow later. There is no trace of a fresh sea breeze any more! 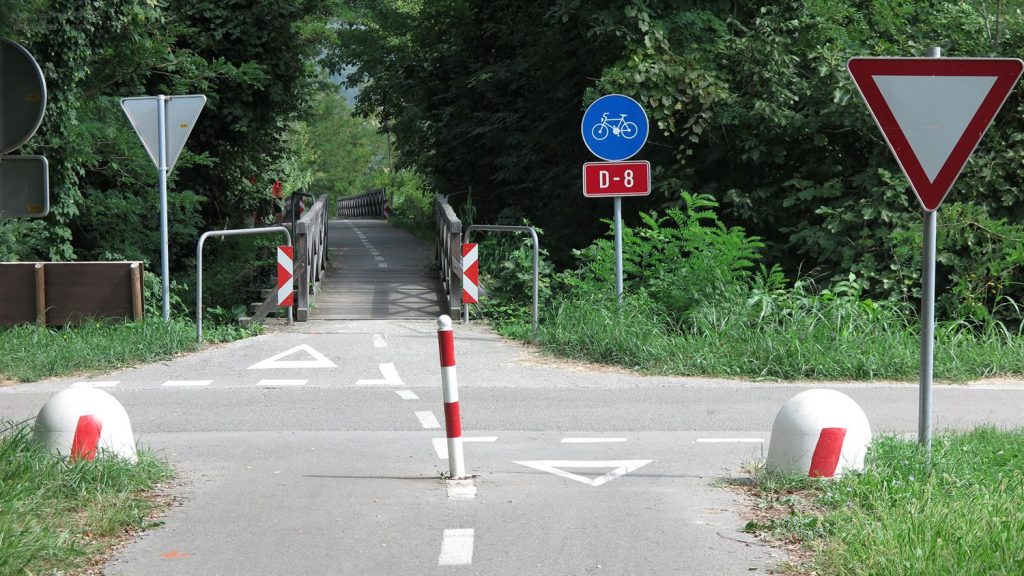 And then: Koper. Narrow alleys, crumbling plaster, in between freshly painted houses, palm trees. It smells of the sea and fried fish. For the beauties of the piazza, the praetor’s palace, the armoury or the cathedral with its bell tower, I don’t yet have a view. First of all I want to go to the sea. And here I make a long lunch break before I look at the Piazza in peace. 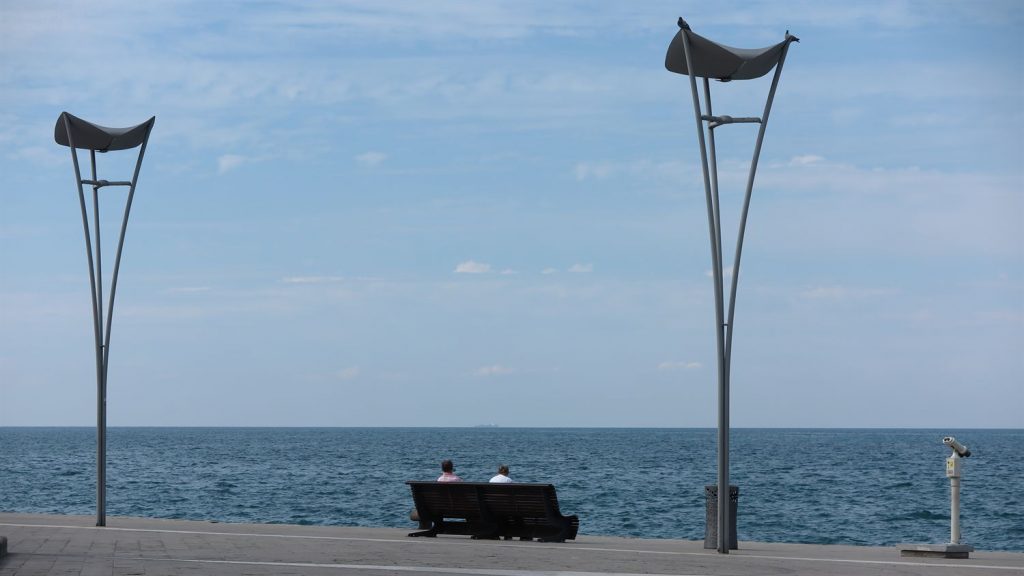 At the Adriatic Sea! 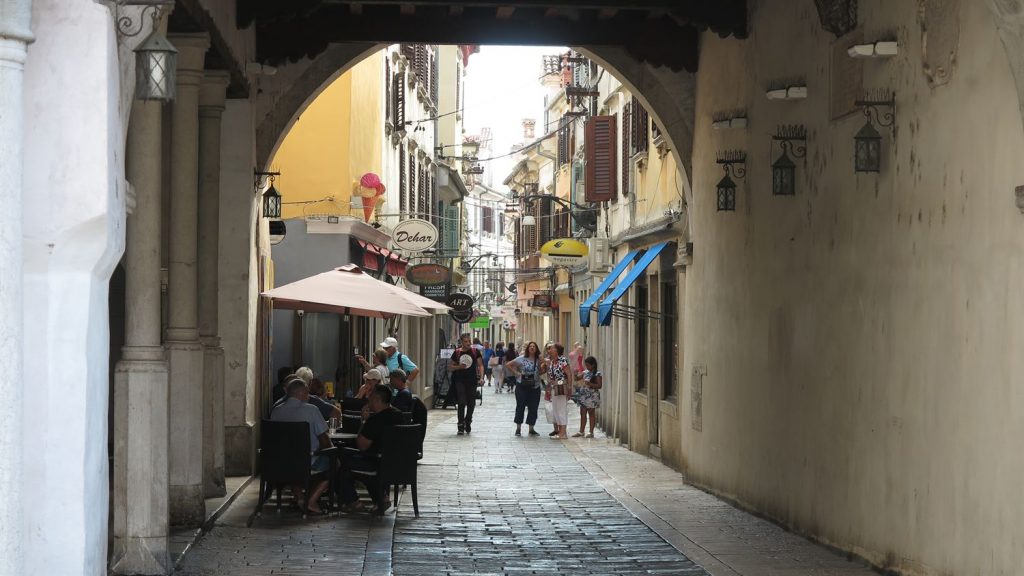 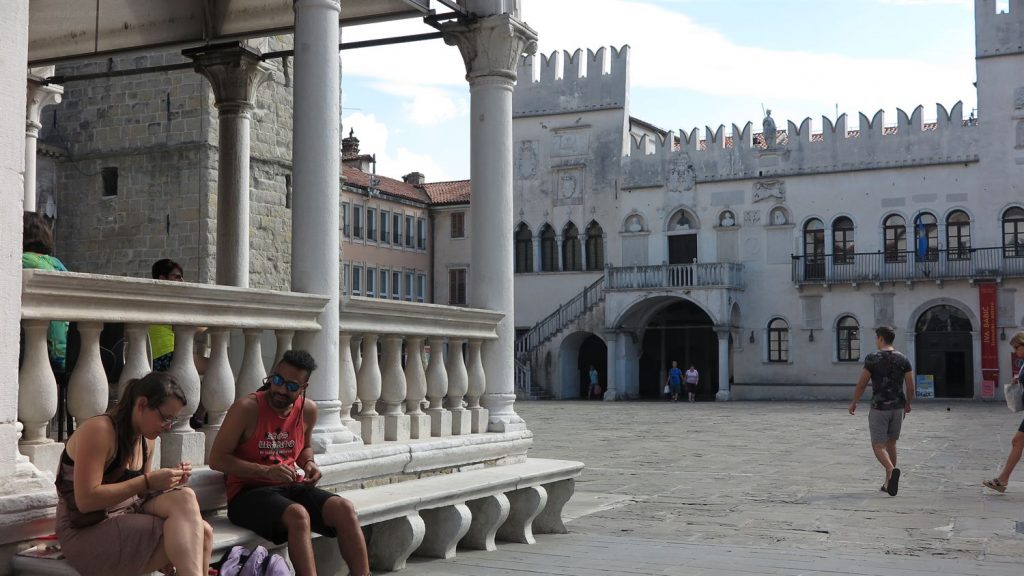 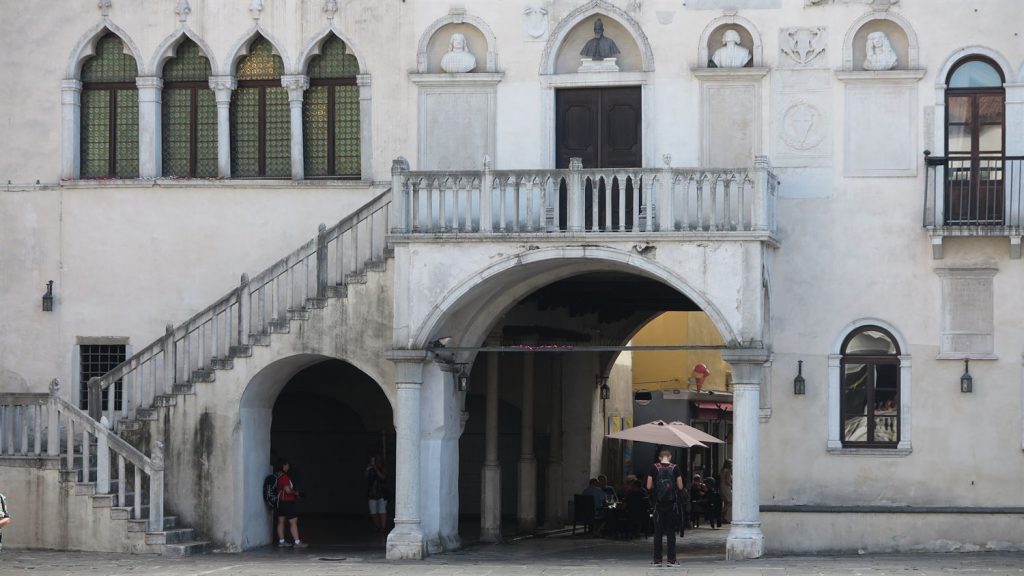 Entrance of the Praetor’s Palace 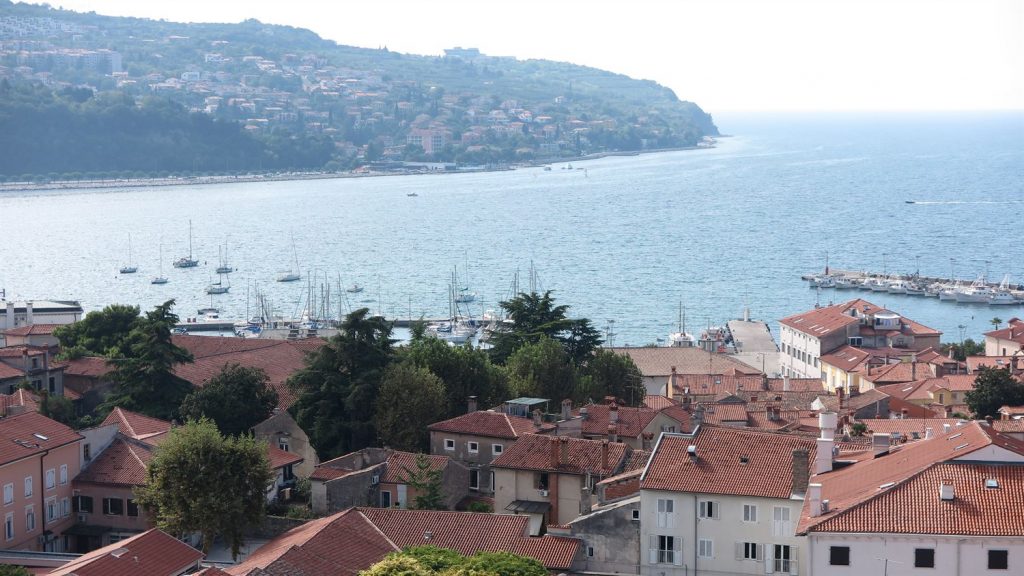 View from the bell tower

Alongside the coast and through vineyards, apple orchards and bamboo groves I drive on to Lucija, where there is a camping site directly at my way. And then the normal routine: set up tent, showers, … ? Take a shower? Wait, I am at the sea! So first I go to the beach. I swim a few moves out to sea, turn on my back, close my eyes and let myself be enveloped by the September warm shelter of the Adriatic Sea. And I feel, I have arrived. Actually my journey is over here. Four and a half weeks ago I turned my back on the Baltic Sea and cycled once lengthwise through Central Europe and to its southern sea. From coast to coast. What else can come now? 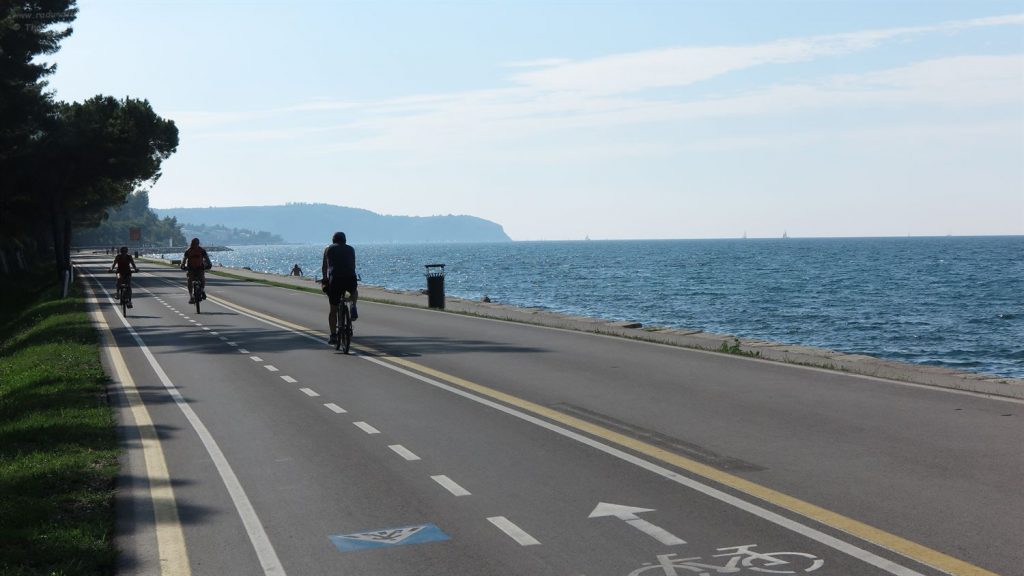 Parenzana between Koper and Izola 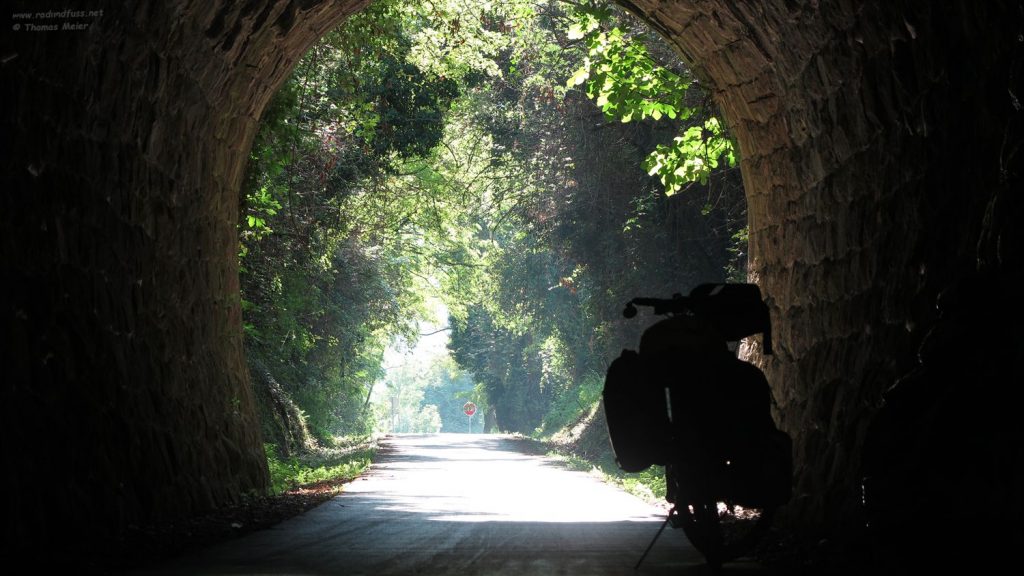 In one of the railway tunnels.

Tomorrow I will drive over to Croatia, because the Eurovelo 9, which I didn’t see any more in Slovenia, officially ends in Pula. I’m also looking forward to refreshing some memories of the 2011 holiday in Croatia, which started in Istria. Today, by the way, the camping kitchen stays cold. To celebrate the day I go to a fish restaurant and enjoy grilled squid with chard potatoes over a glass of wine! 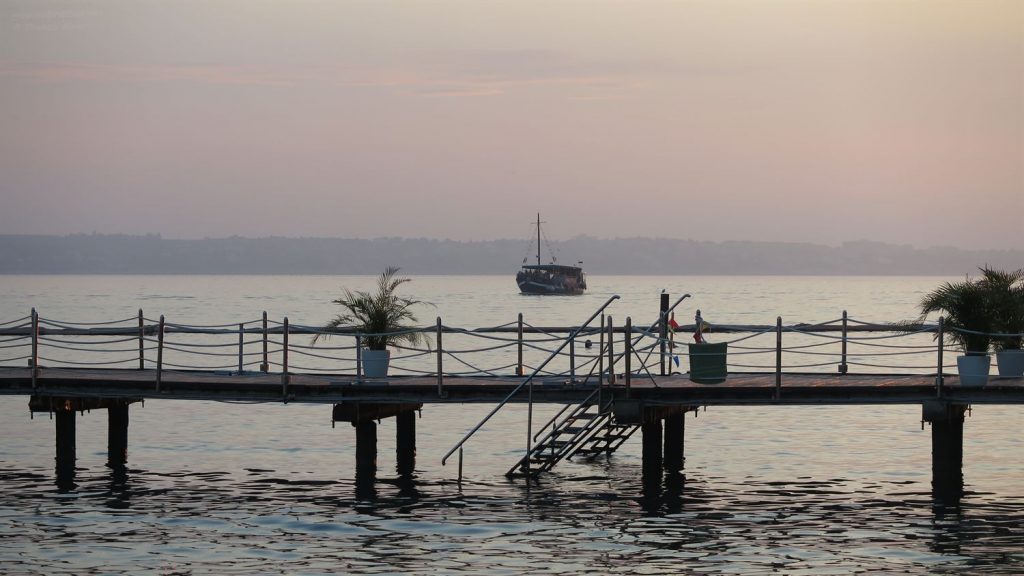 At the evening in Portoroz

One Reply to “To the Andriatic Sea”