In the morning mist lies over the valleys, while Grožnjan is still dozing in the sun. Yesterday’s article I already mentioned Parenzana, I can hardly repeat that today. Thereby I continue on the old railway line, the way requires permanent attention because of the surface – more or less hard gravel – but because it is going downhill, it is also a quite relaxed ride. A few tunnels and some viaducts offer variety. In the section between Oprtalj and Livade there are some particularly narrow bends, so the train drivers had strict speed restrictions of 10 km/h. I can’t go any faster either, but that’s due to the coarse gravel. 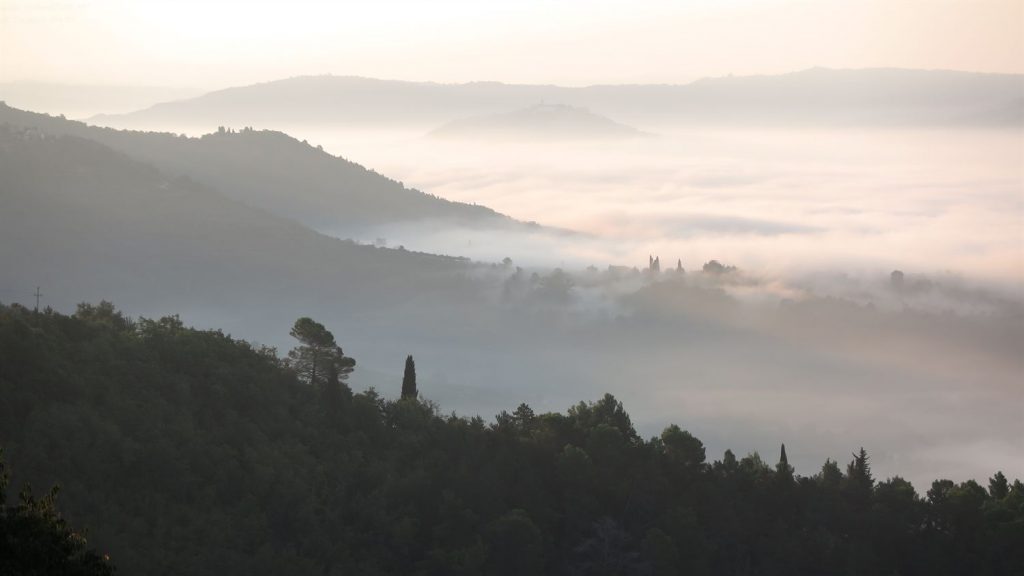 Morning mist over the valleys 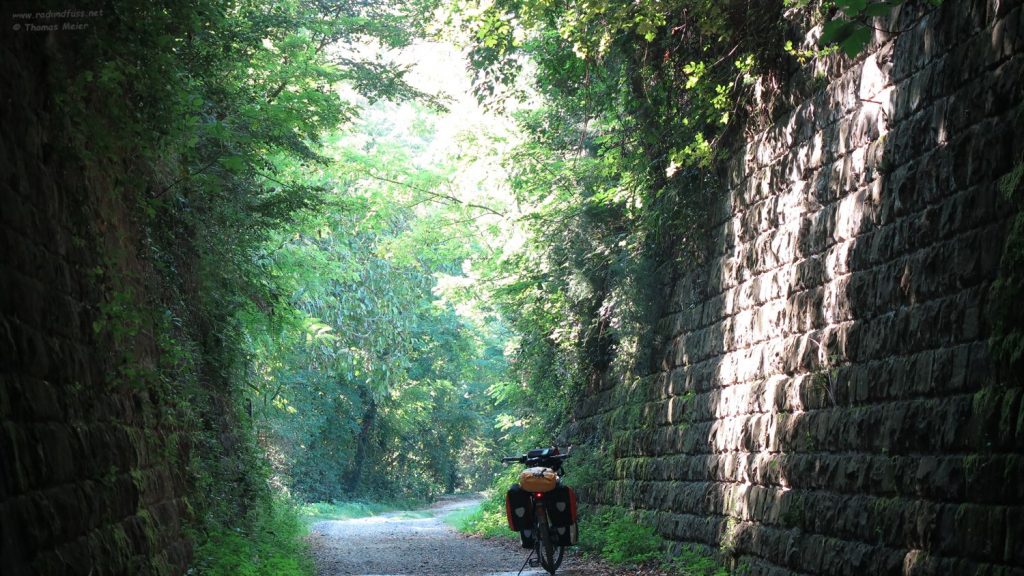 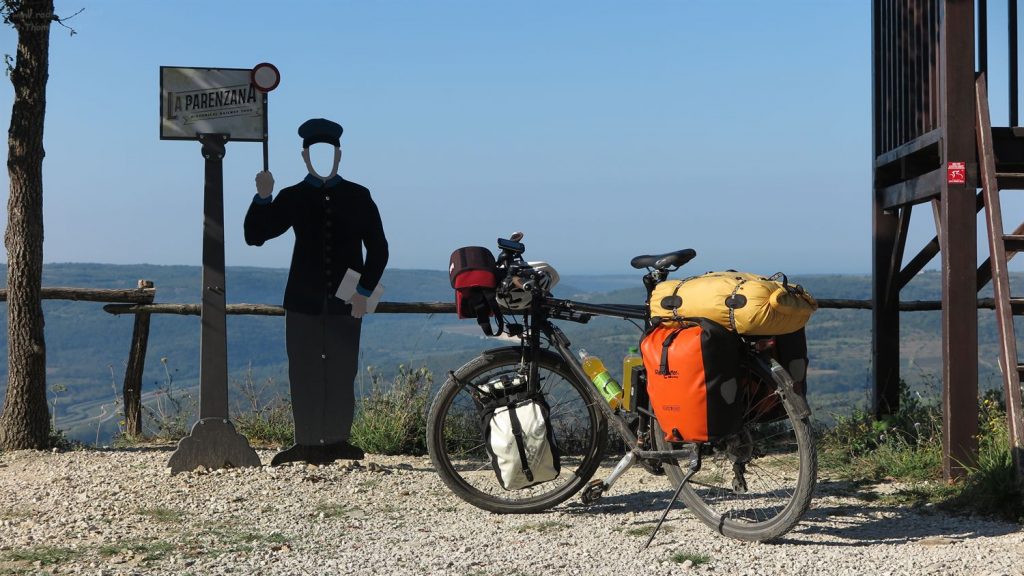 At this “stop” there is mainly one thing: a view!

Motovun, the mountain village, which for a long time was only recognizable as a silhouette in haze and backlighting, takes on contours as the route in Livade reaches the Mirna Valley. I am now in the centre of the Istrian truffle region and the truffle season has just begun. Guided truffle searches are offered while in Livade there is just one truffle – yes, what can you call it? Exhibition? Fair? under the name “truffle days” taking place. Here truffles are offered along with accessories such as truffle rasps, truffle salami and cheese, wine and olive oil. After eating a truffle omelette last night, I’m still trying a truffle cheese today. But you have to like that. I think it reminds me of garlic, but tastes stricter. If not too much quite tasty, in masses inedible! 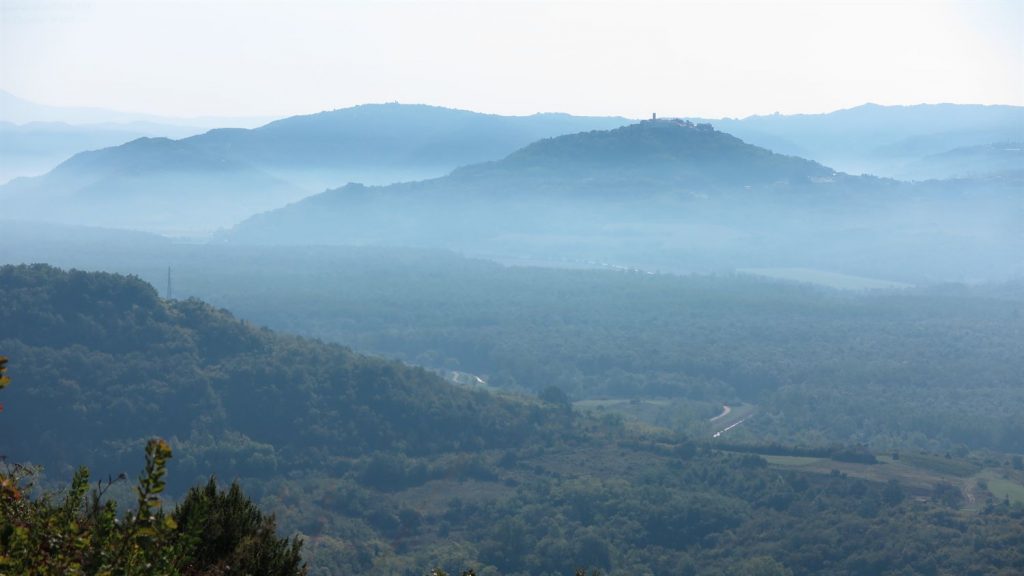 On the mountain: Motovun 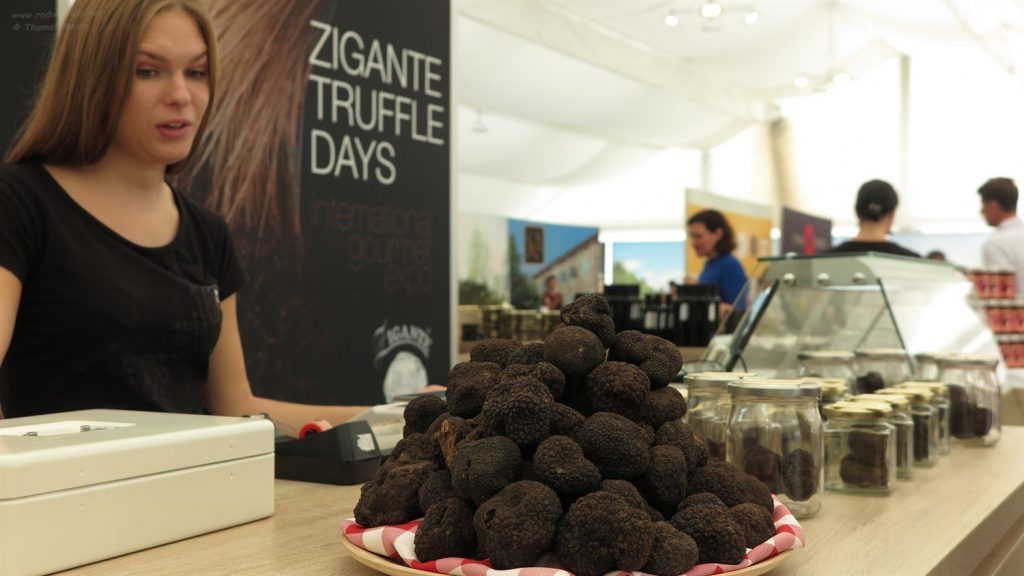 Due to Itzok’s recommendation I leave Parenzana here and drive a few kilometres down the Mirna valley before turning off to Vižinada. This is followed by the longest ascent I have ever driven in 1st gear on this tour. Since it runs steadily and without major steepness, it is quite pleasant. A long descent follows, past reddish fields, areas with dark grapes, through oak forests and small villages down to Poreč. 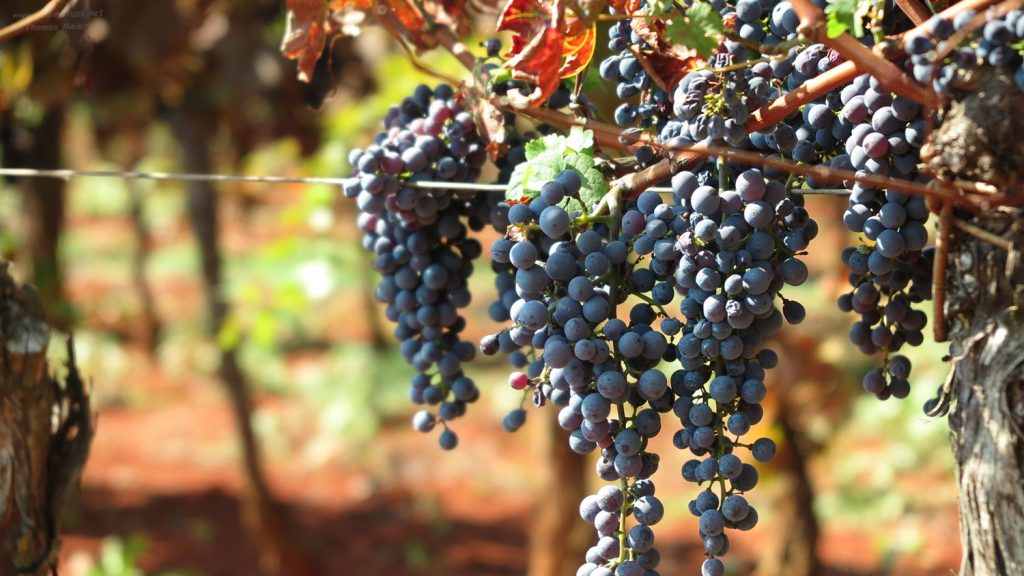 blue grapes on the way to Poreč

Poreč seems to me more touristy than in 2011, even more jet-set-heavy, when I look at the motor yachts in the harbour. In the village there are lots of restaurants, which are apparently only visited by tourists and souvenir shops. But of course also the Euphrasius Basilica, which was added to the UNESCO World Heritage List in 1997 and is probably the main attraction for the public. And I’ll take another look at it. Based on Christian predecessors, the basilica received its present form and equipment already in the 6th century by Bishop Euphrasius. I find it simply fascinating that the partly gilded mosaics are over 1,500 years old! 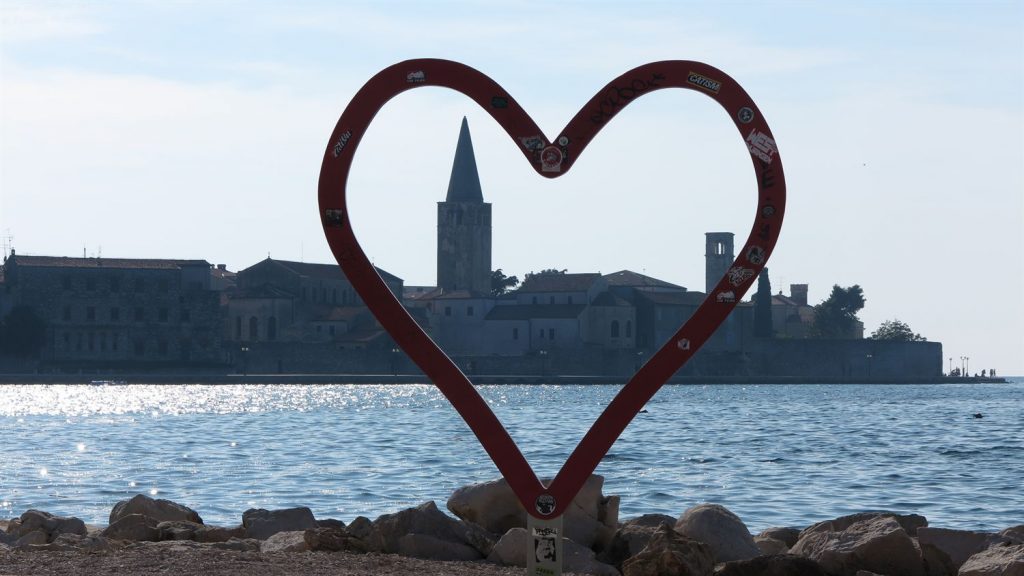 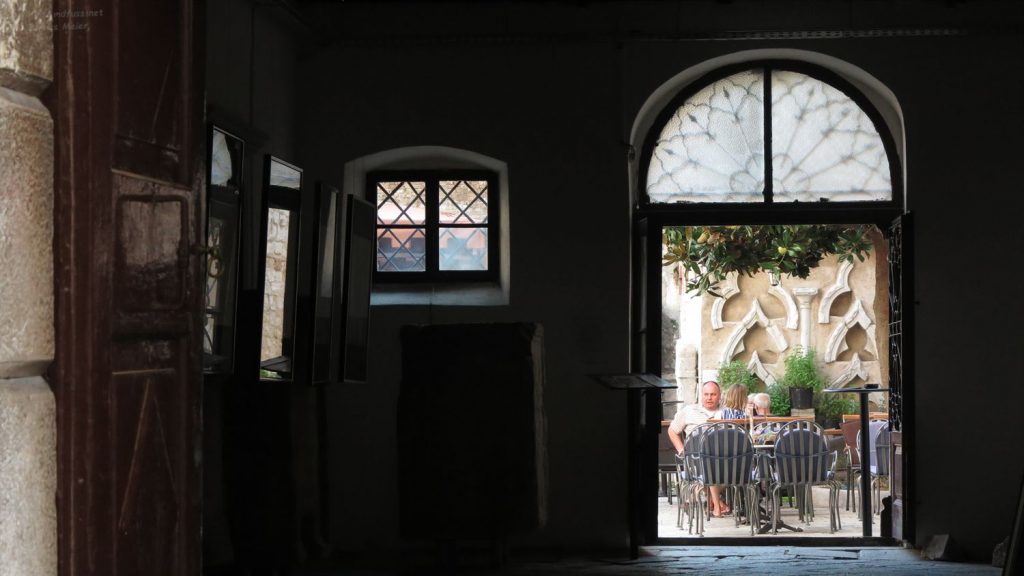 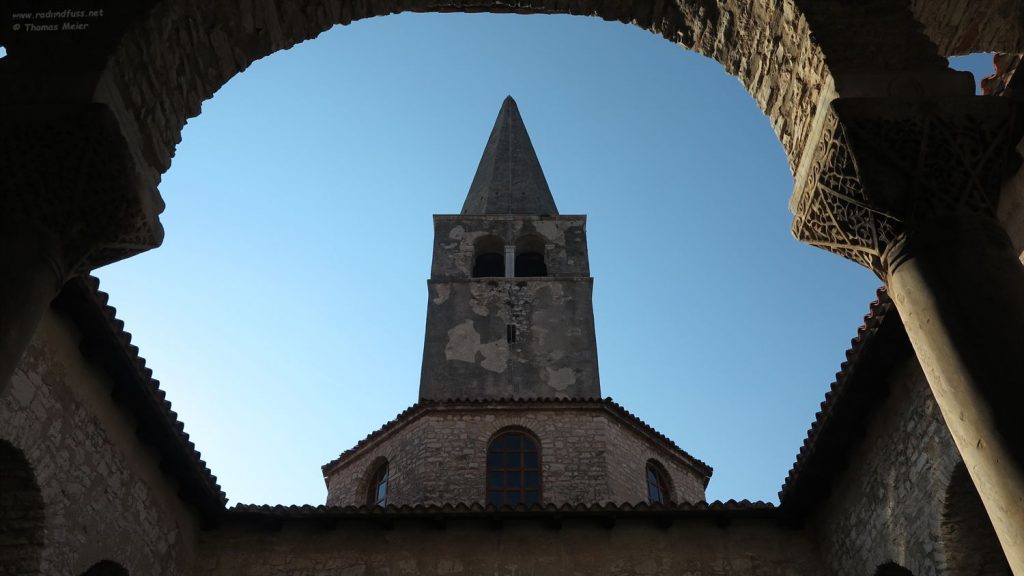 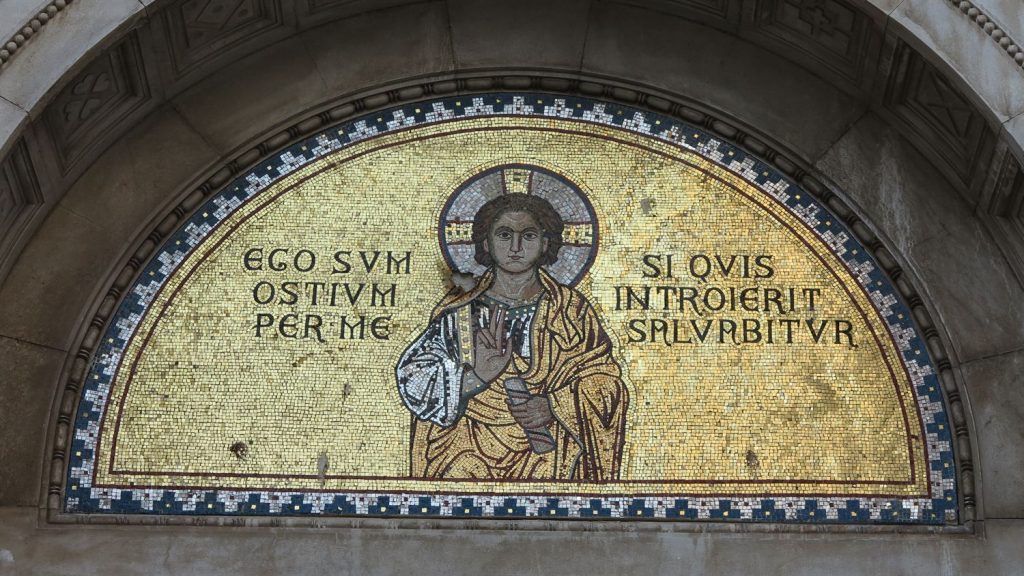 The gold mosaic above the entrance portal 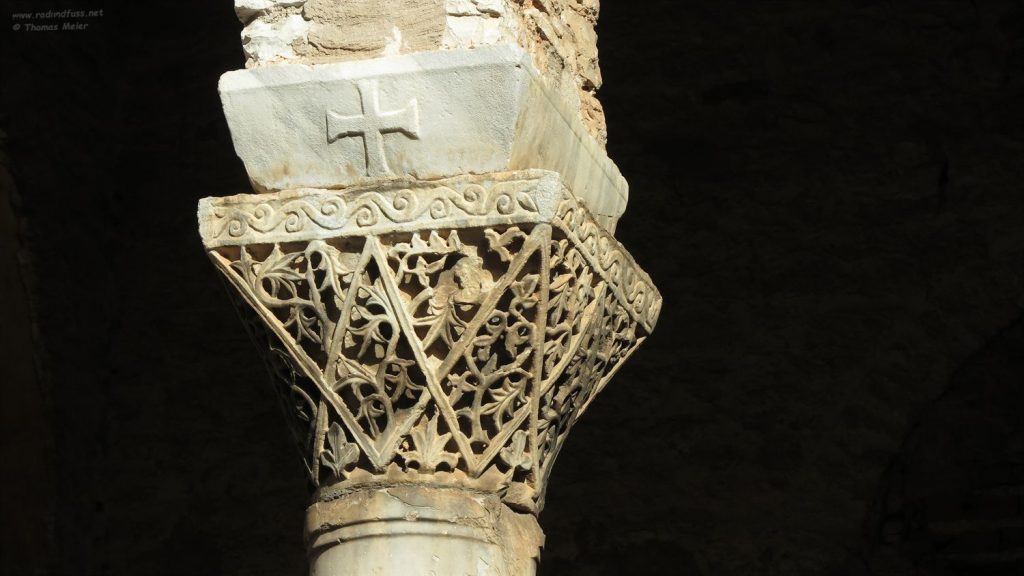 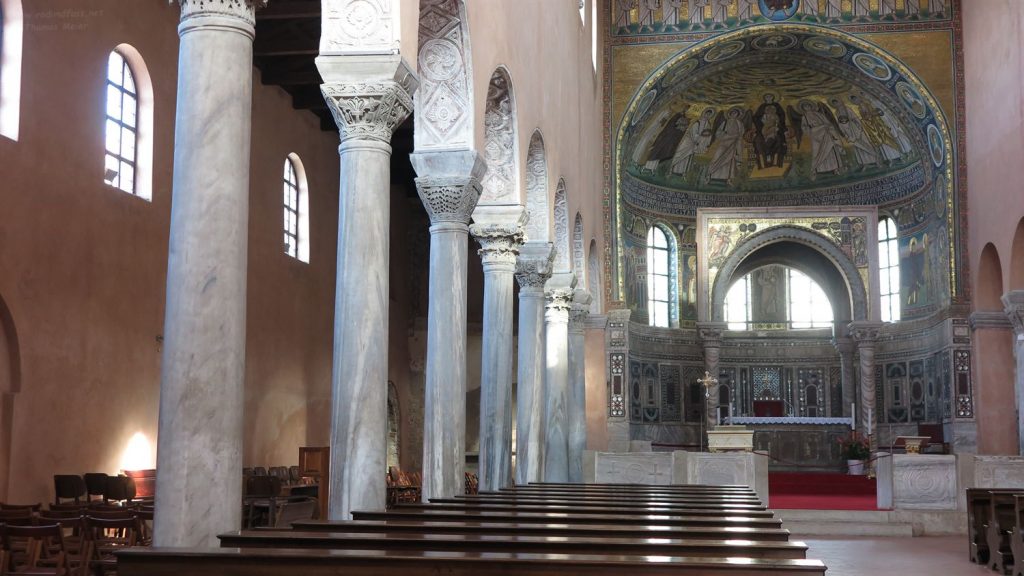 South of Poreč cycling becomes a bit tedious. The promenade along the shore is open for cyclists, and even more: the official cycle path runs here. But there is one hotel after the other, interrupted by bars. All to the left of the path. To the right is the beach and in between a lot of people. But it works! Nobody complains, one arranges oneself. A few kilometres behind Poreč in Funtana I stay on a camping site, which lies relatively quietly at a lagoon and in any case has no animation offers, as it seems to be usual here at the coast!

One Reply to “From Grožnjan to Poreč”