Every quarter of an hour there is a bus running through the Stubaital. So someone comes, hardly, that we stand at the bus stop and brings us to the ascent of the Sulzenauer hut. For the remaining two days, we have a program that one could easily complete in one. But as we have to be back in the valley on Friday in order to go home, no other route could be found. No matter. So we have a lot of time. So we have a lot of time. On a comfortable way we walk to the Sulzenauer Alm, which presents itself sun-flooded after the shadow of the forest on a wide, almost flat valley floor. At the end of the valley basin the meltwater of the Sulzenauferner plunges about 200 meters into the depth, splashing, foaming and overturning, as if they wanted to get out of the cold shade of the valley head as fast as possible to the sunny alpine pasture ground. 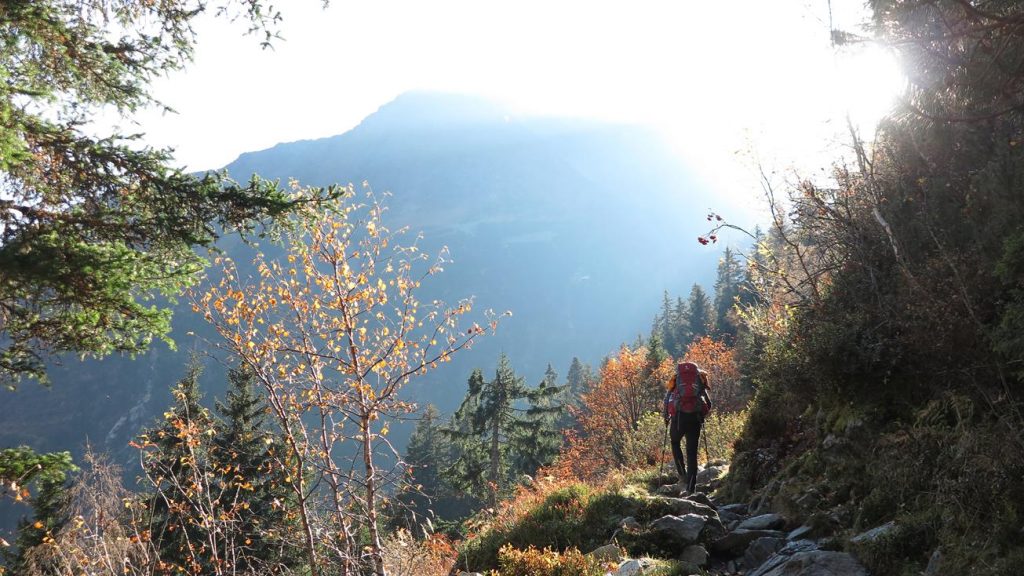 On the ascent to the Sulzenaualm 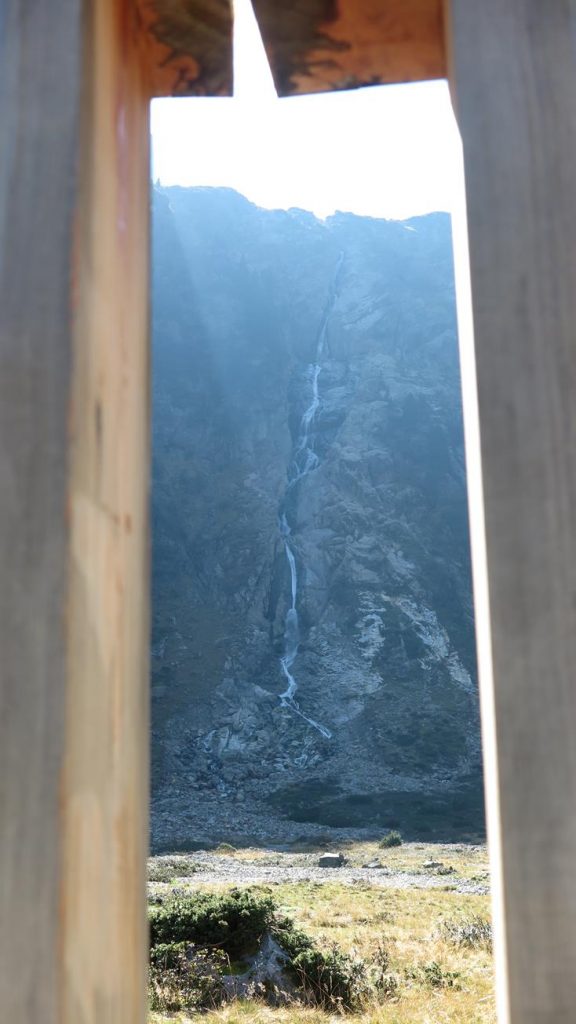 It would be nice if the alp was still farmed, a coffee would be just right for me now. And surprisingly there’s a flag hanging outside indicating to the hiker: Hey, take a break and leave some money there! The Alm is a highlight! It was built by the owner himself. He is 86 today and has been carving since his primary school days, even today! And so there are expressive and detailed carvings to be discovered at every corner of the alp, on the walls, on chairs and tables, on the terrace. Even the locks of the patio doors are cleverly made. 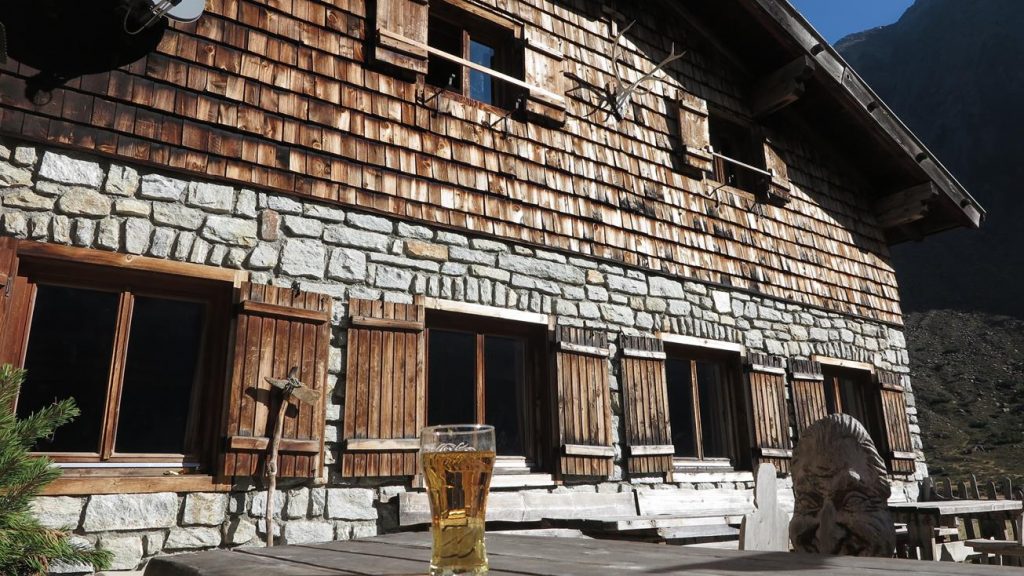 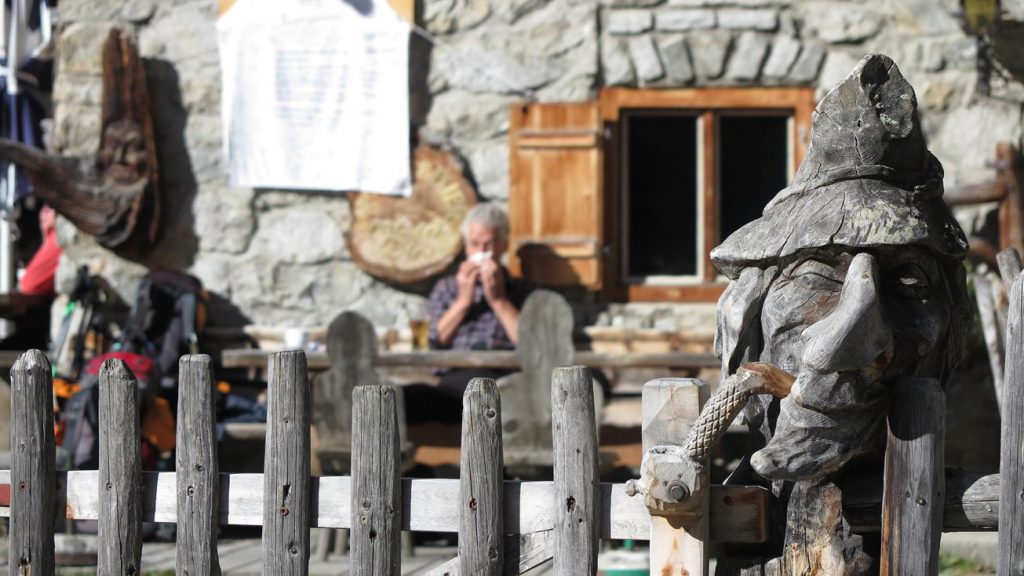 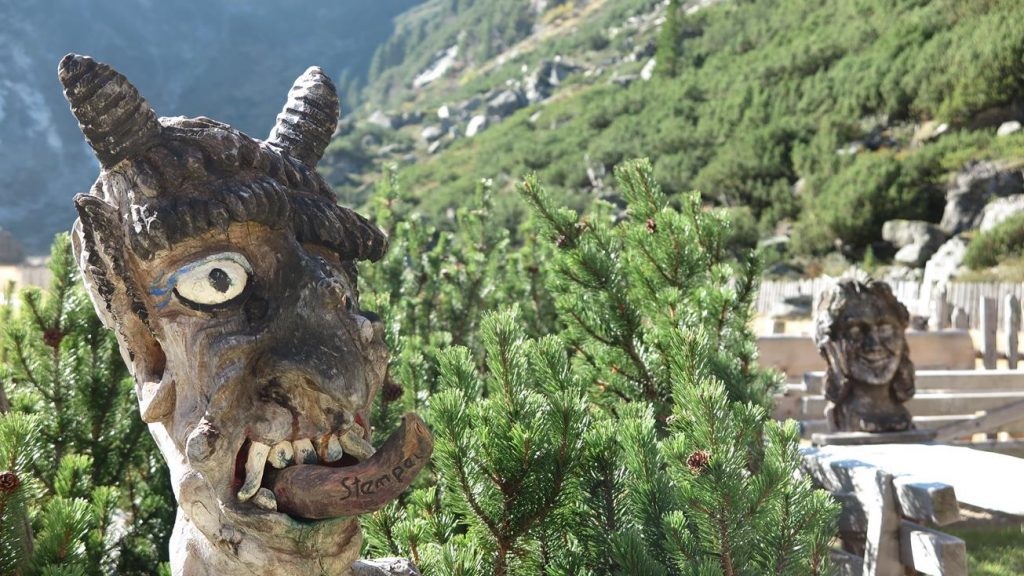 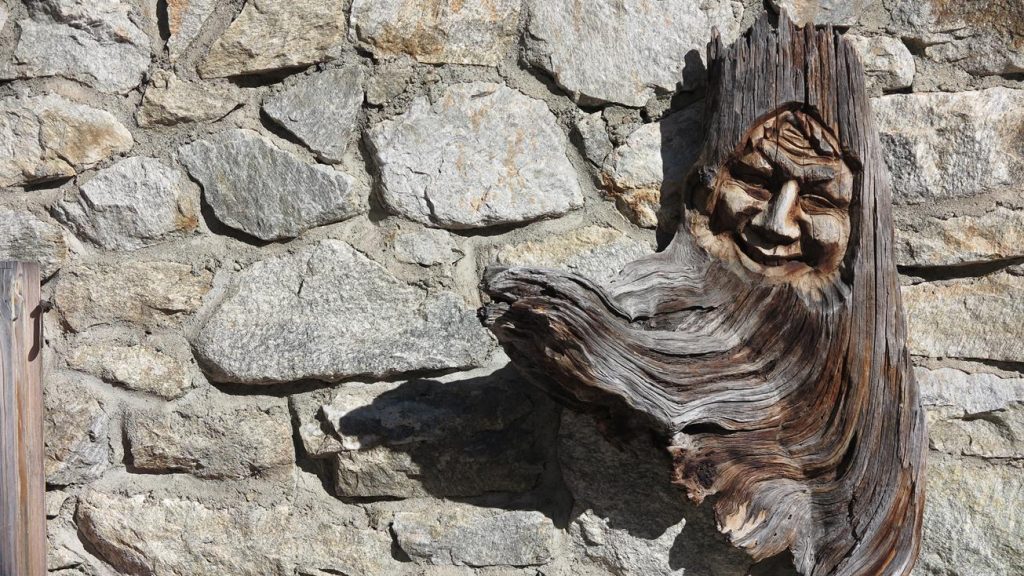 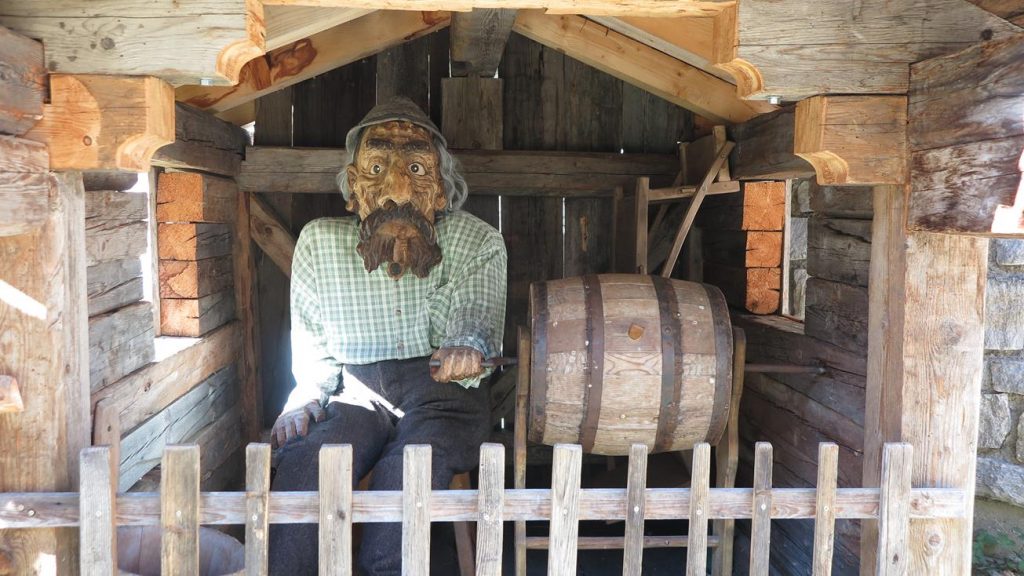 We like it so much that we stay for a Kaiserschmarrn after the coffee and then have an espresso afterwards. Nothing pushes us, up to the Sulzenauhütte, our today’s quarter it is only one hour away. As I said: we have a lot of time today! Although: the map shows that the Trögler is only 700 height meters and about 2 hours away from the hut and promises to offer a fantastic panorama of the Stubai glacier world! 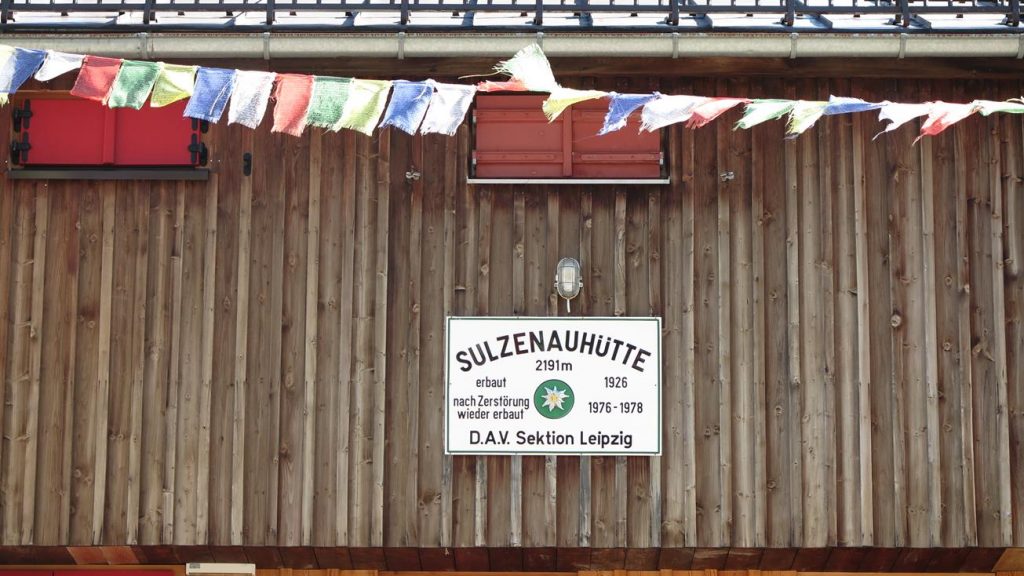 Since it is still early enough, I start after the hut ascent with small luggage, while Leo after the yesterday descent spares his legs and only wants to pay a visit to the nearby Blaue Lacke. Over narrow bends and very exposed I climb a small path up the steep flank of the Trögler, interrupted by some rocky and wire-rope-insured passages. After the flank, it’s about one kilometre in several ups and downs over the summit ridge until a last rocky upswing leads to the summit of the Großer Trögler at 2,902m altitude. And it rewards me with blue sky, sun and a great panorama! 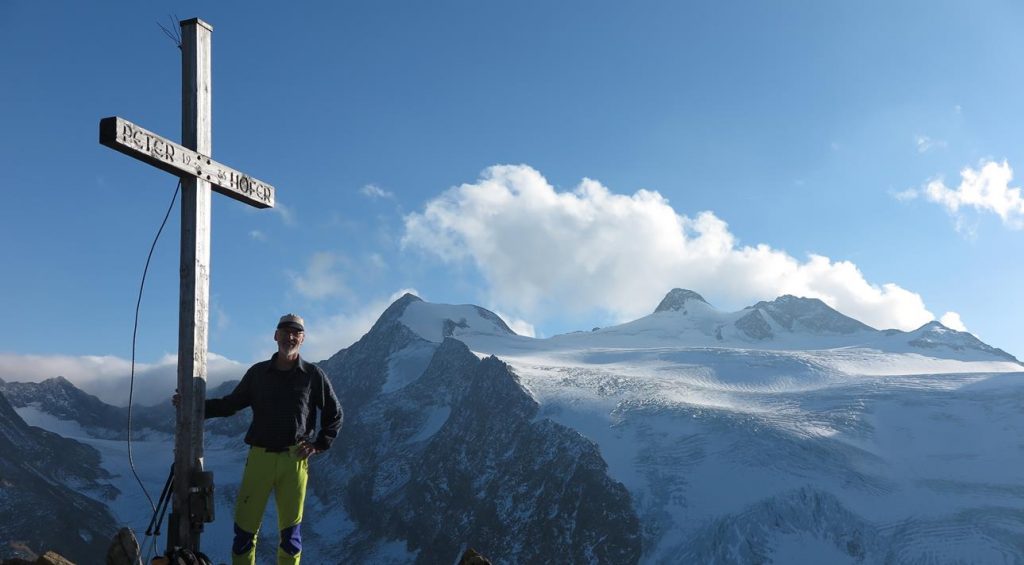 On the summit of Gr. Trögler 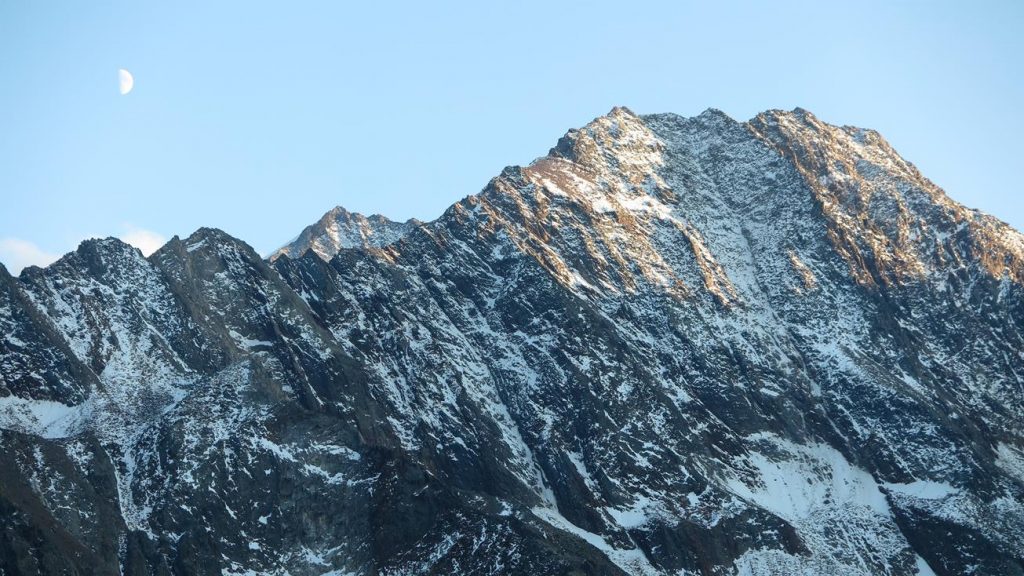