The Istrian coastal road, which I tried to avoid by taking a detour via Parenzana, finally got me under control. But there is simply no other reasonable connection from Rovinj to Pula. Unless you drive at least one and a half times the distance and over ” whiteroads ” – a euphemism for the gravel roads, which I just heard yesterday – or adventurous trails, which I don’t want to put myself or my bike through right now. 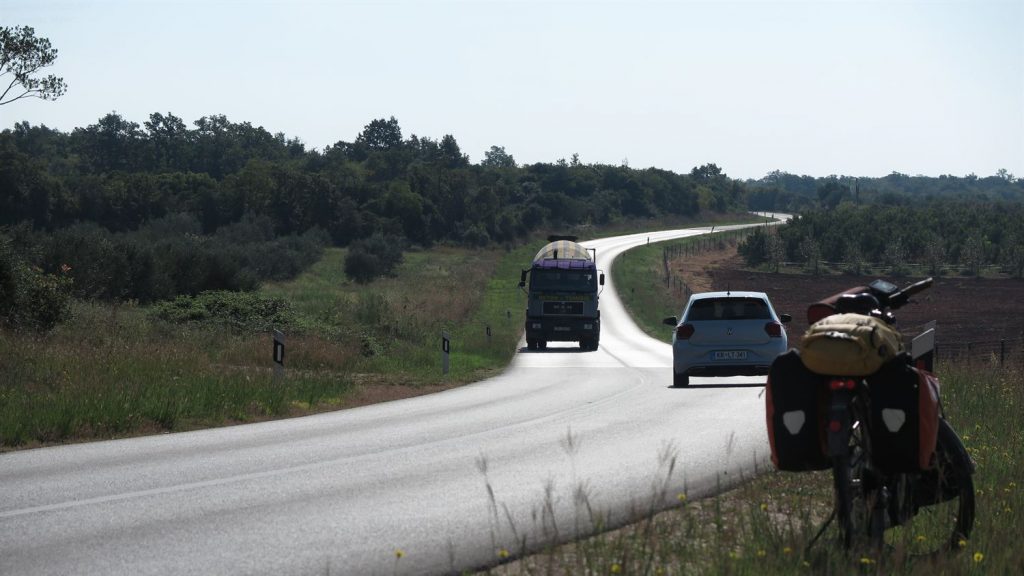 On the road from Rovinj to Pula

The province of Istria would do well to provide the Eurovelo with its own route, preferably off the main road, before its completion. The local guesthouses would certainly be happy about it and there are also subsidies from the EU! So I tear down the about 30 km as fast as possible, whereby a certain feeling of euphoria carries me, after the felt end of the tour at the Adriatic Sea near Koper, to reach now also the official one in Pula.

While the cars use the ring road, I drive into Vodnjan and have a break for an espresso. I notice that I forgot to switch on the track recording again. Since it is not worth it now, about 8 km before Pula, any more, there is no map today! In addition, I see that for the last kilometres I don’t have to follow the here totally straight main road any more, but I get to Pula in a curve over Fažana on a smaller road and thus a little more stress-free. 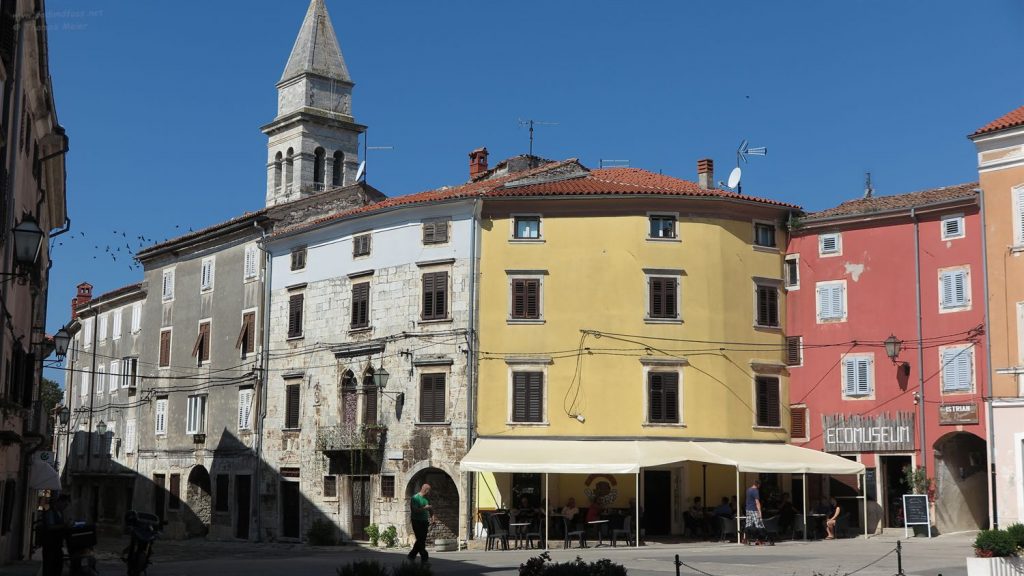 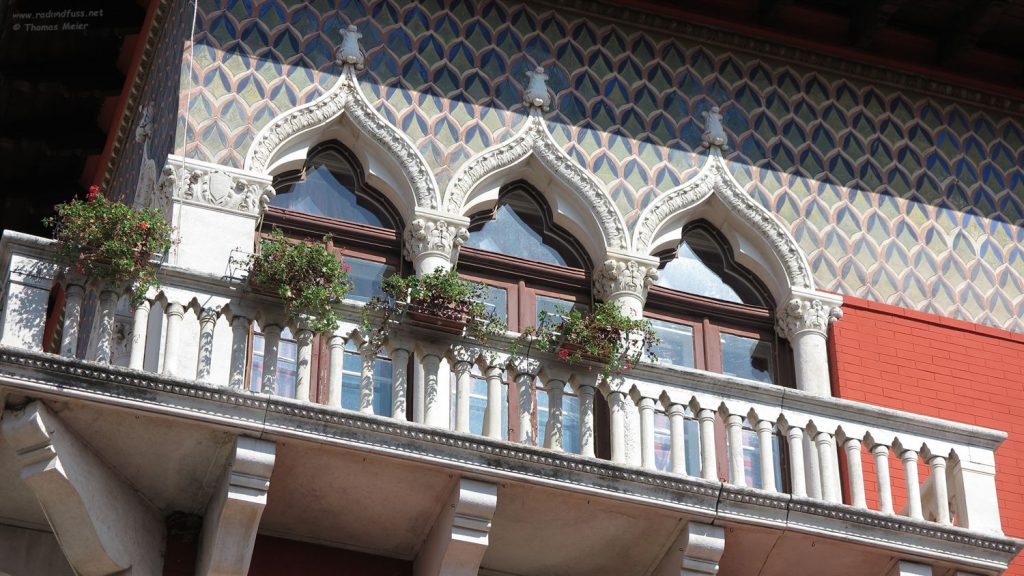 Balcony at the town hall 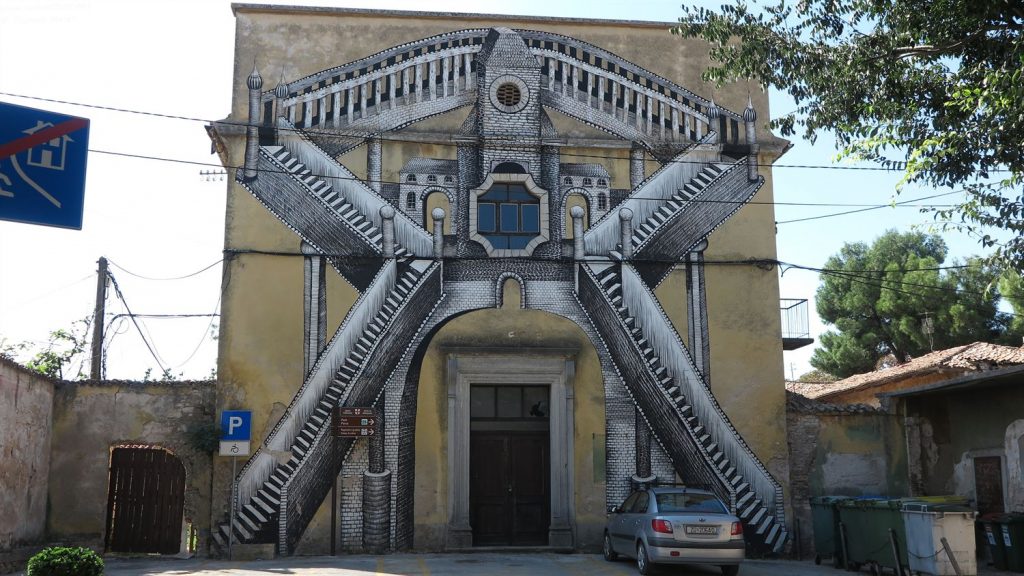 Graffito at the exit from Narodni trg

Passing the industrial port, I reach the direction Pula’s city centre. And then it suddenly stands in front of me: the amphitheatre, built under Emperor Augustus in Roman times and today a landmark of the city. I was here seven years ago, but today it’s different. Now I have arrived not only emotionally, but also locally! Destination reached!! One should certainly not see bike tours too puristically: it is not reprehensible to cover a distance by train. Traffic situation, weather, health problems can make this seem quite reasonable. But nevertheless I am a little proud to have covered the whole distance with my own muscle power. 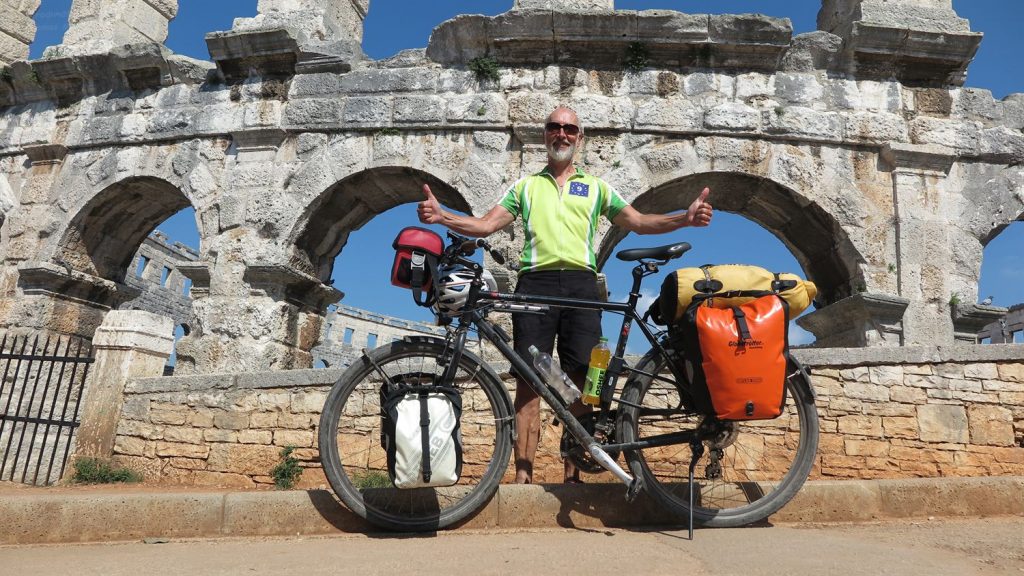 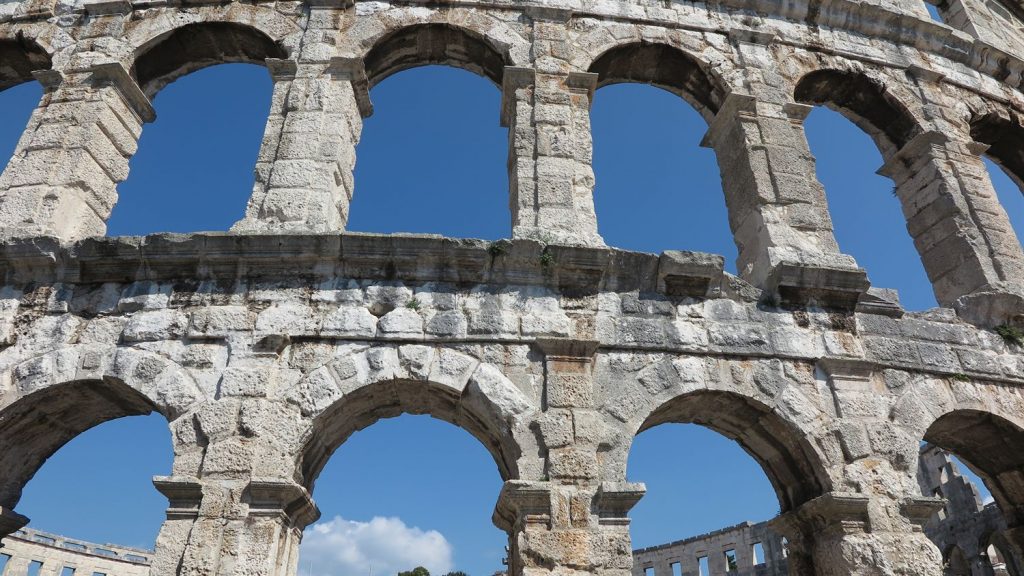 And another unobstructed view of the amphitheatre 😉 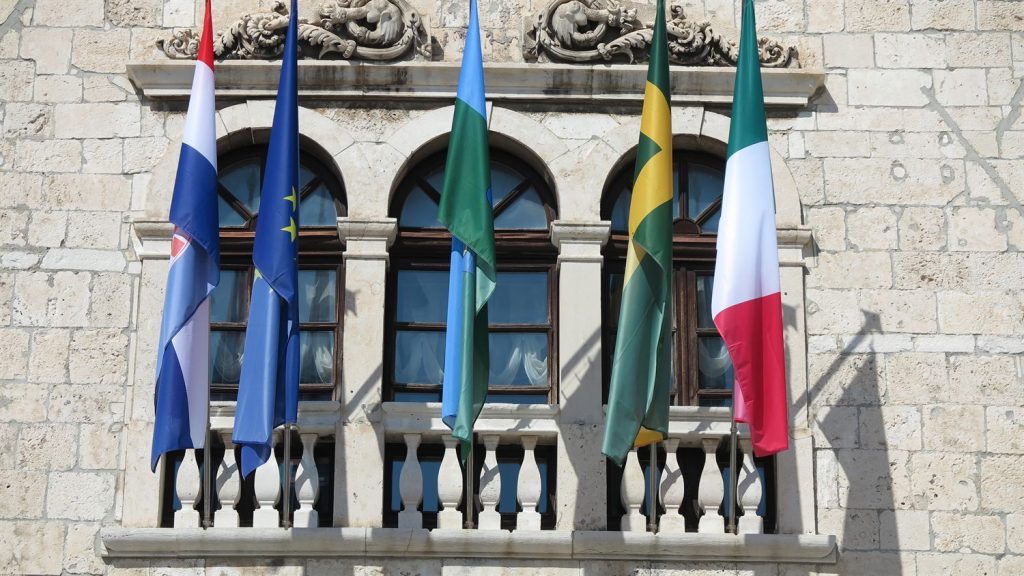 Flag jewellery at the town hall 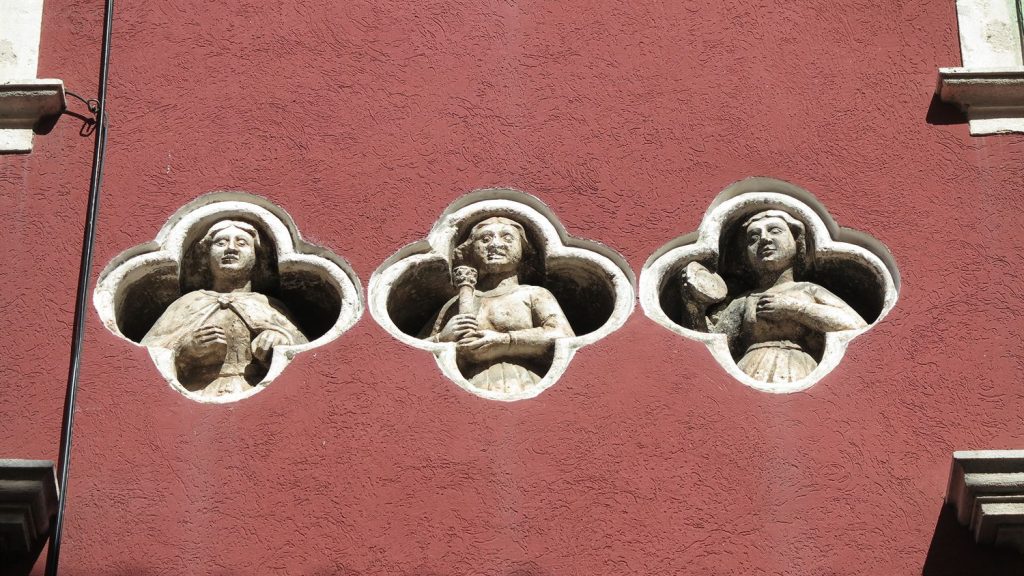 House decoration in the Ulica Sergijevaca 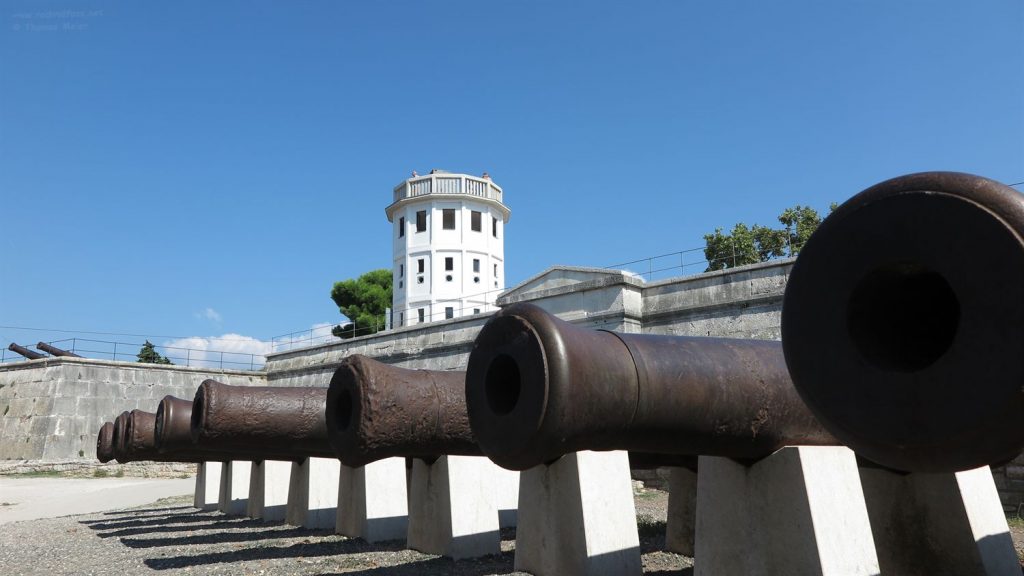 The fort of Pula

And that is the end of the reporting! I’m sure there will be a conclusion, but I’ll probably do that at home in peace and quiet. Since I can organize the bicycle transport on Thursday to the airport already in the afternoon, it will probably be a boring day tomorrow: beach or something 🙂 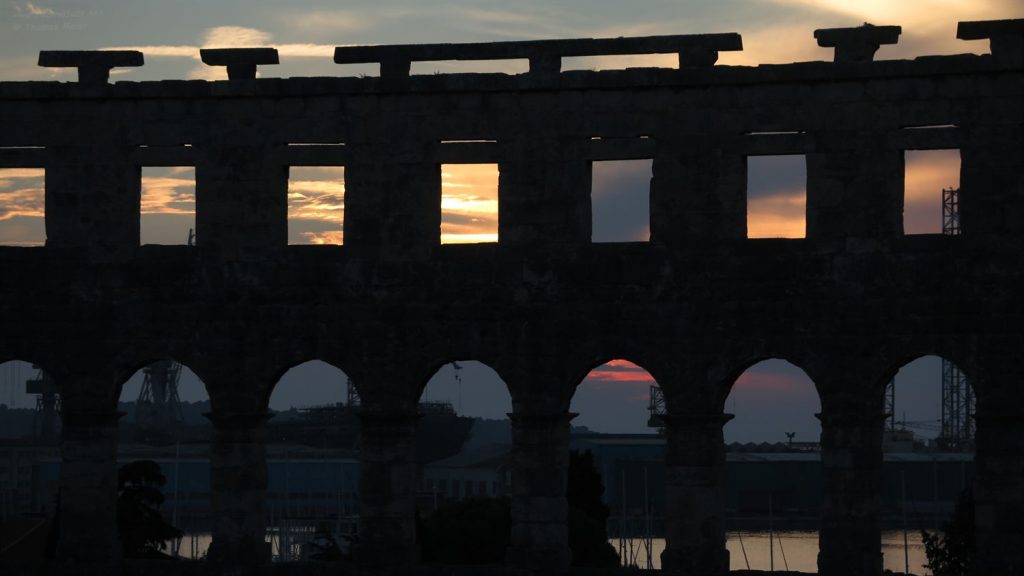