Thanks to Andrej’s tip I leave the first mountains on the left and drive on small asphalted roads exactly in the angle between plain and upswing.

Behind Vrhnica there is a dry valley, similar to the Moravian Karst, but this time the road is not asphalted. It is idyllic here. You can only hear the chirping of birds, the screeching of the buzzard, the cawing of ravens, leaves rushing in the wind and the occasional crackling of acorns falling from the tree. But I’m pretty sure that’s not the way Andrej recommended to me at the moment. And of course the price is a few steep climbs at the end of the valley. 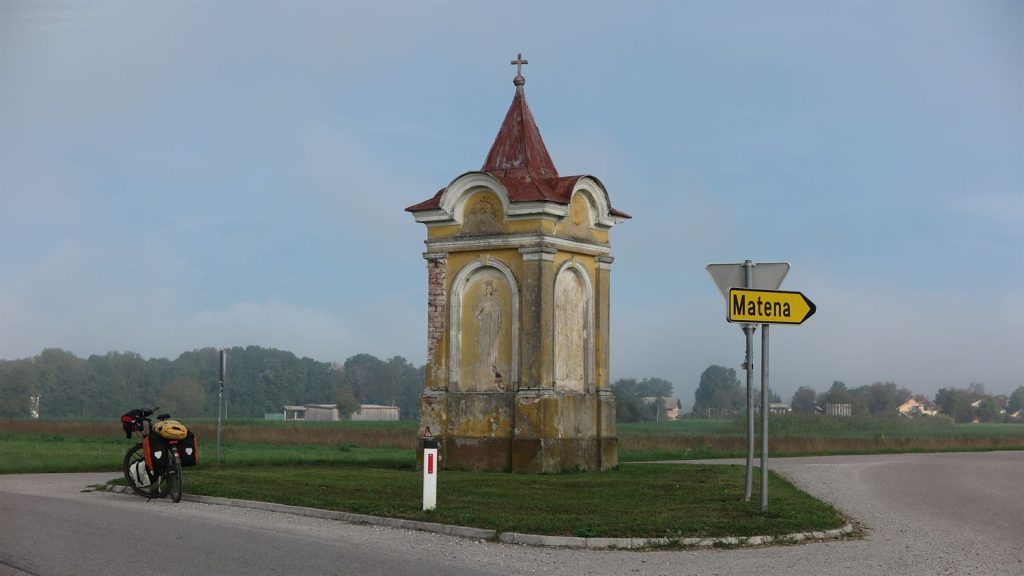 In the morning somewhere behind Ljubljana 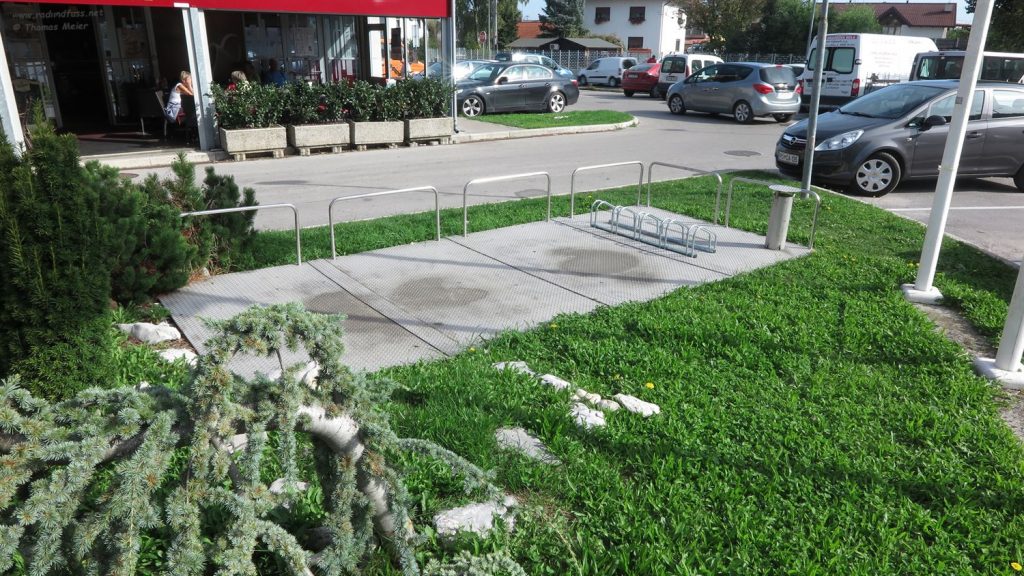 useful bicycle parking: how to get there?

At noon I meet a couple from Villach who are also on their way to Croatia, but with their motorbike. Who knows, maybe we will meet again in Pula! By the way, coffee breaks are more and more fun since days. The coffee gets smaller, but also better the further I get to the south.

At Planina I drive along a wide, flat basin in which, according to the map, a river, the Unica, meanders, whereby it both rises and disappears on this surface. Later I learn that the caves of Postojna are fed by the Pivka, which comes out as Unica, before it disappears again in the karst and finally flows as Ljublanica to Lubljana and there into the Save. Karst makes geography quite complicated! 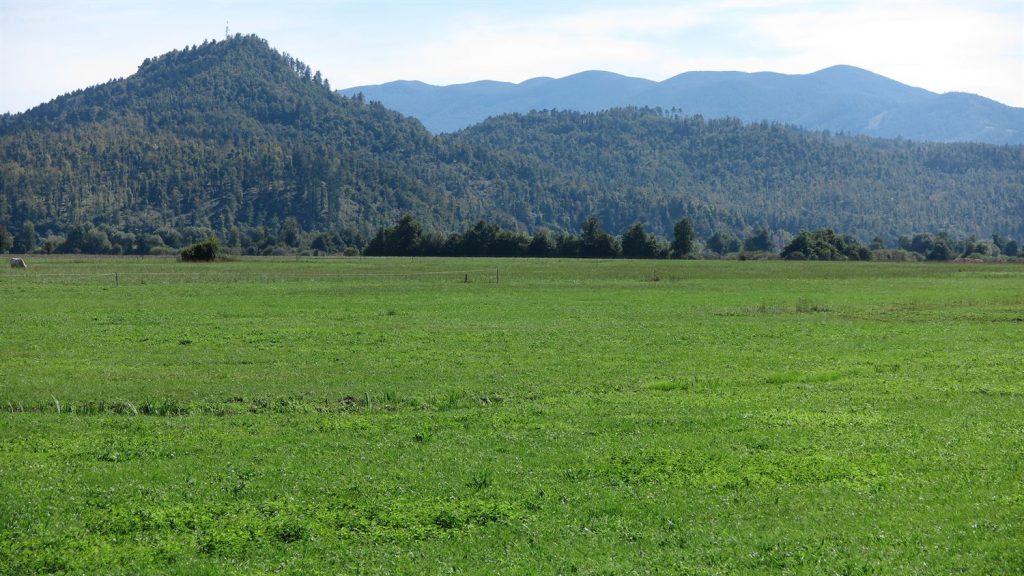 And then the destination of today: The Postojna Caves. Discovered 200 years ago (1818) as the “Adelsberg Grotto” and after only a few years set up as a show cave, today it is the largest cave in Europe accessible to visitors, surpassed in the world only by the Jetta Grotto in Lebanon. The cave is commercial in nature, but this has the advantage that guided tours are also offered in German. The whole cave system is 24 km long, of which 5 are open for tourists. Thereof you walk 1,5 km on foot, the rest is done by train, because the most beautiful parts are further inside. And there are really many of them! The sheer size of the cave and its individual “domes”, some of which have already been used for concert performances and dance events, is already impressive, as are the various stalactites, coloured red, yellow, grey, black or pure white depending on the mineral additive. At the end of the tour I hardly know where to go with my superlatives – and then there are more than 100 different animal species that live here in the darkness, as well as the figurehead of Postojna: the Proteus, better known here as the Grottenolm. In aquariums with special light that does not disturb the amphibians, which never leave their larval stage, some are shown to the visitors. The olms do not become reproductive until they are 16 years old, but still have sex at 80 and live to be over 100 years old!

Around 1 million tourists per year naturally do not pass by such a sensitive ecosystem without a trace. The original locomotives with combustion engines were replaced by electric ones in 1959, the lighting is now switched on and off in front of every group of visitors. 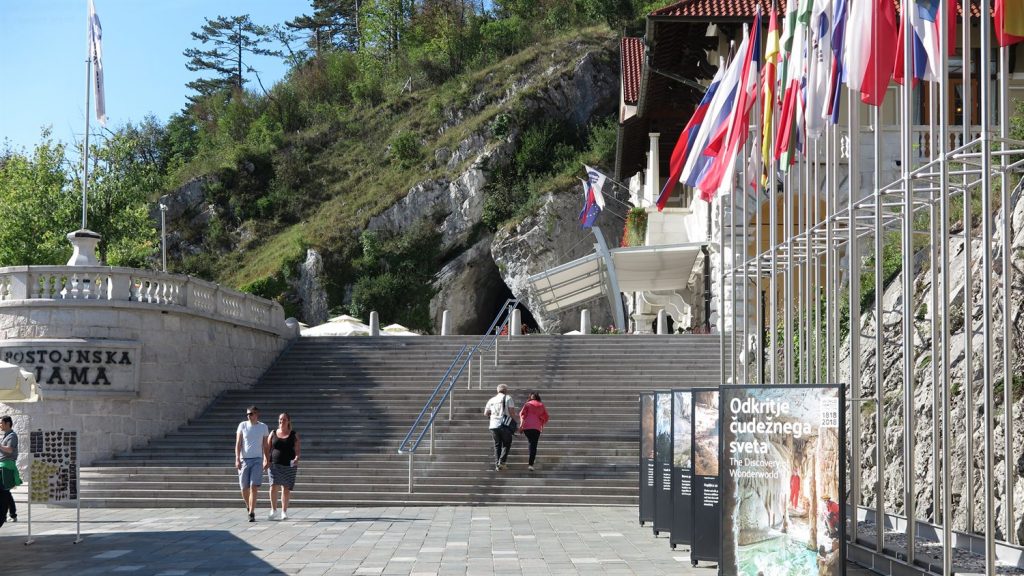 Highly commercialized: the entrance to the caves of Postojna 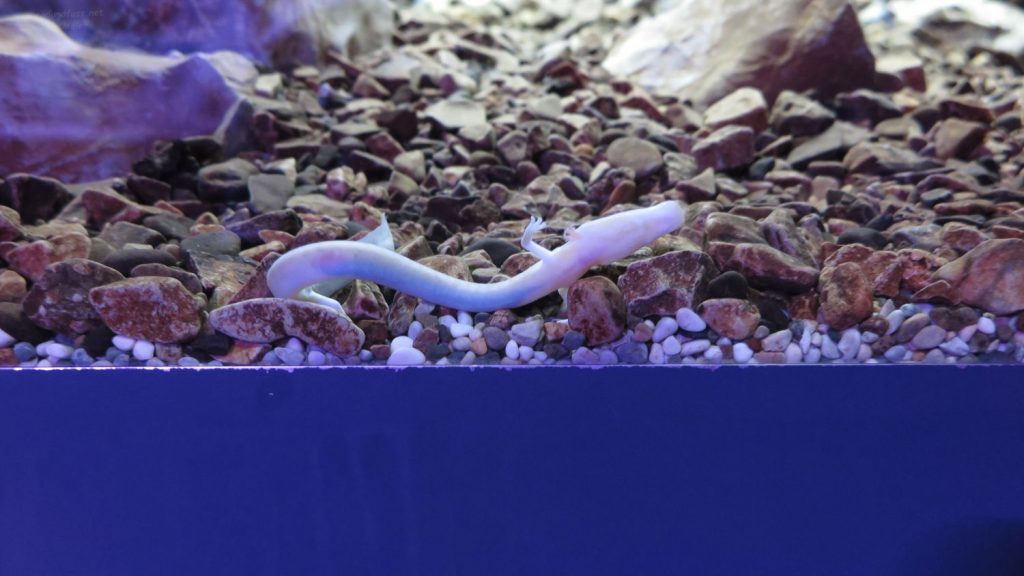 may I introduce: Proteus, the Grottenolm 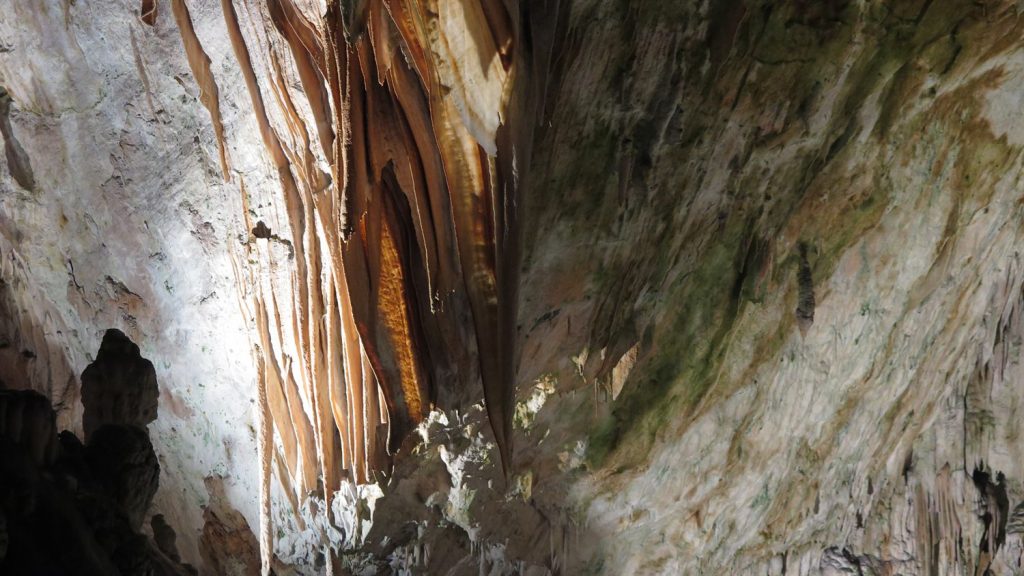 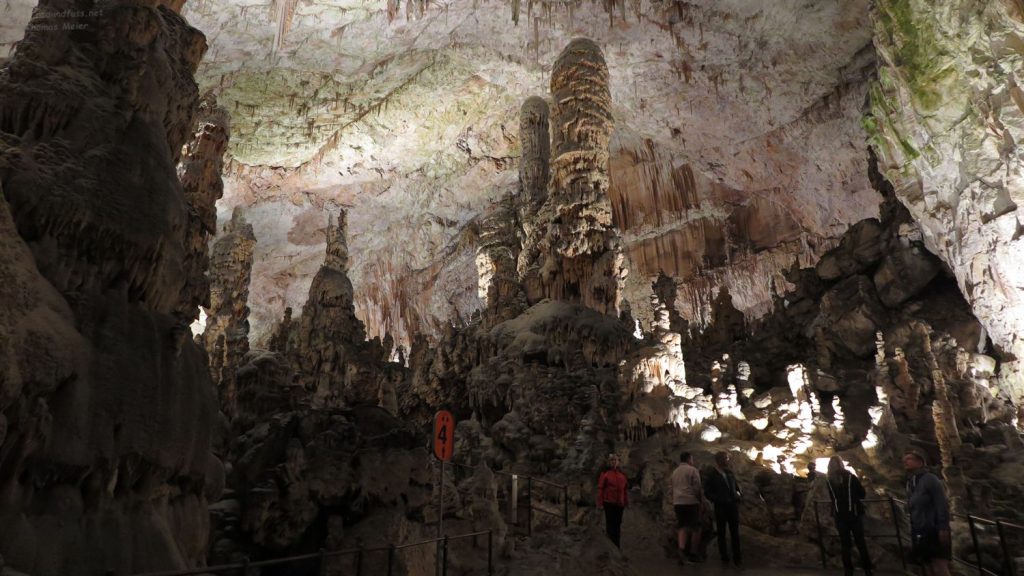 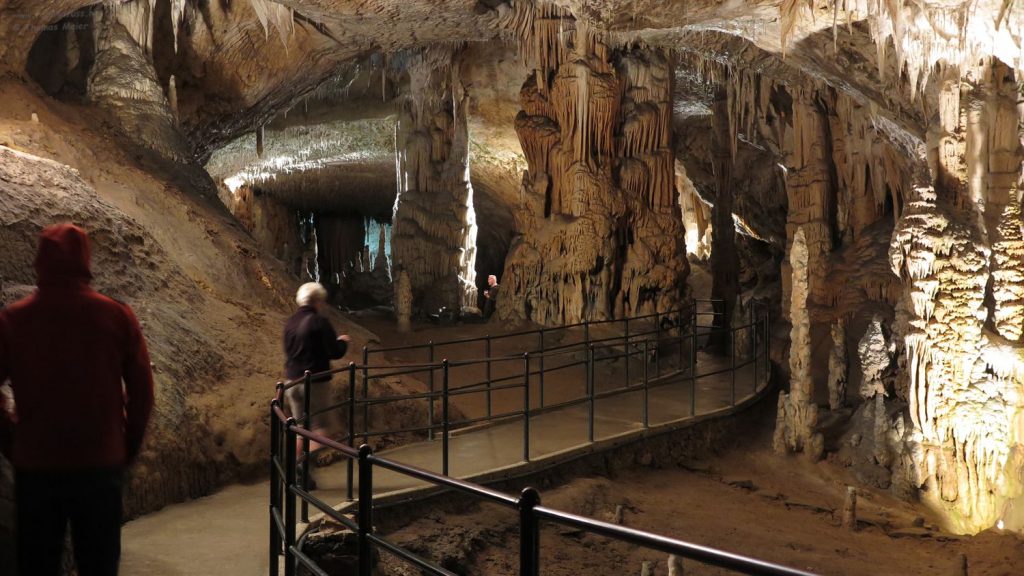 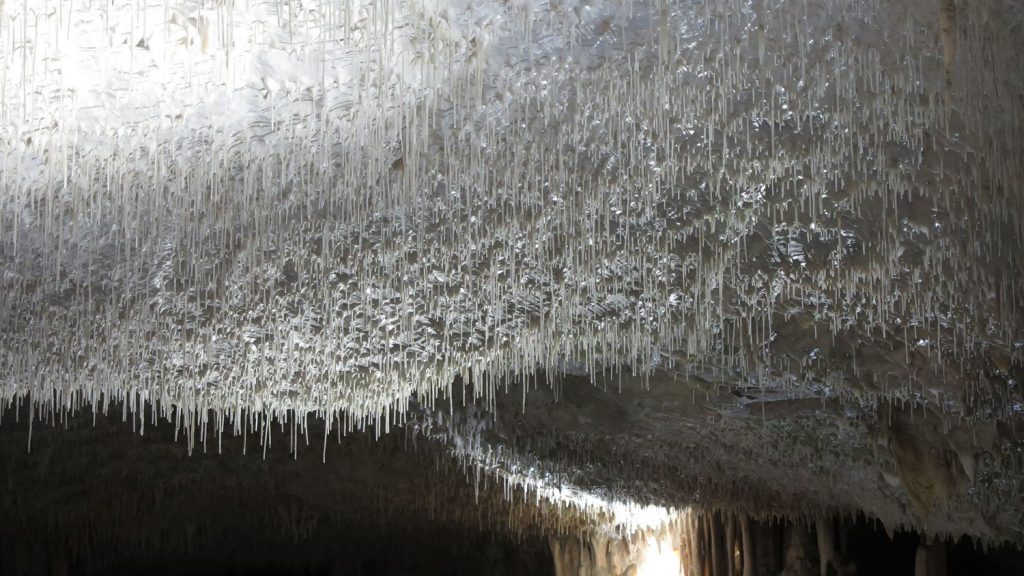 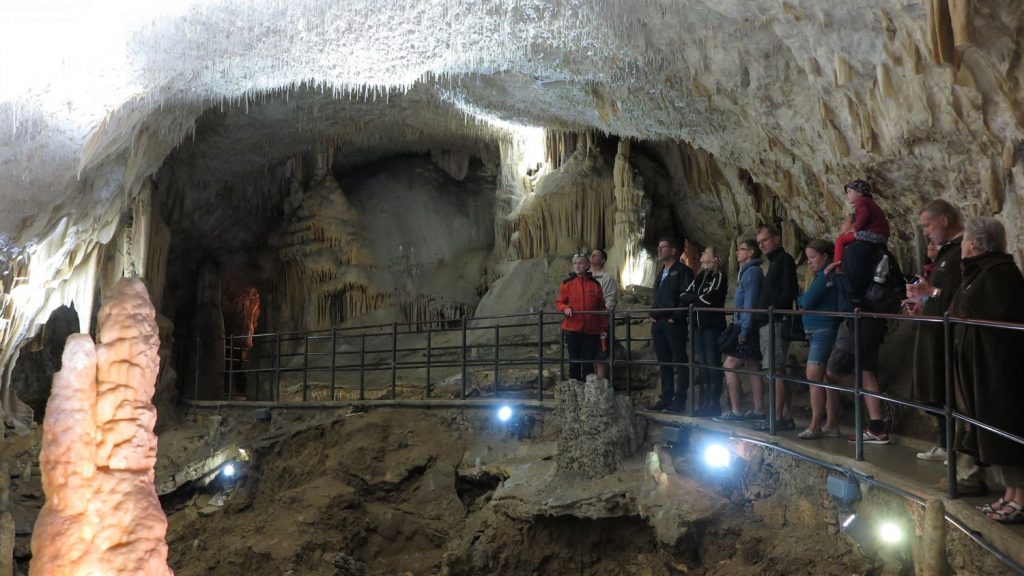 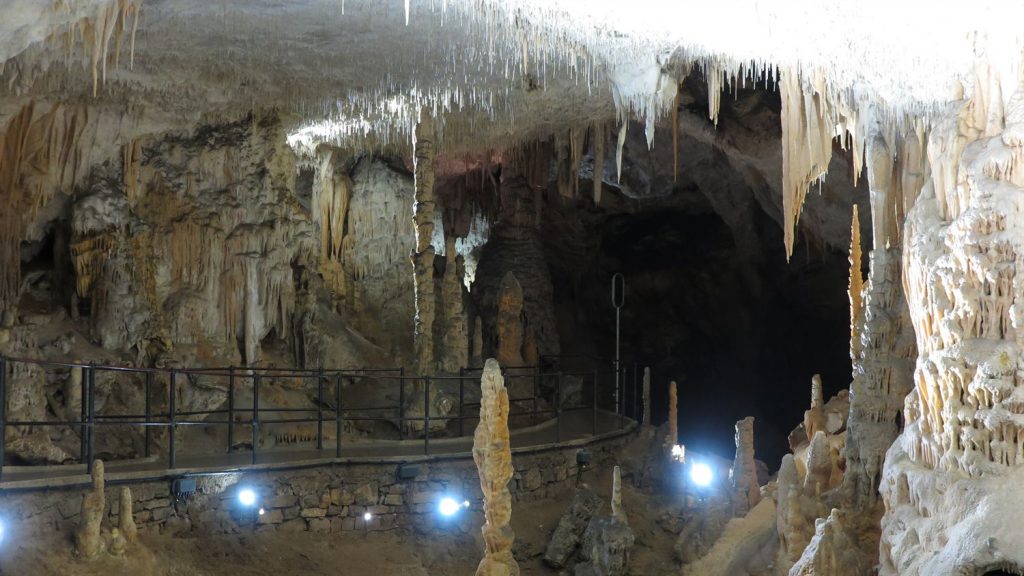 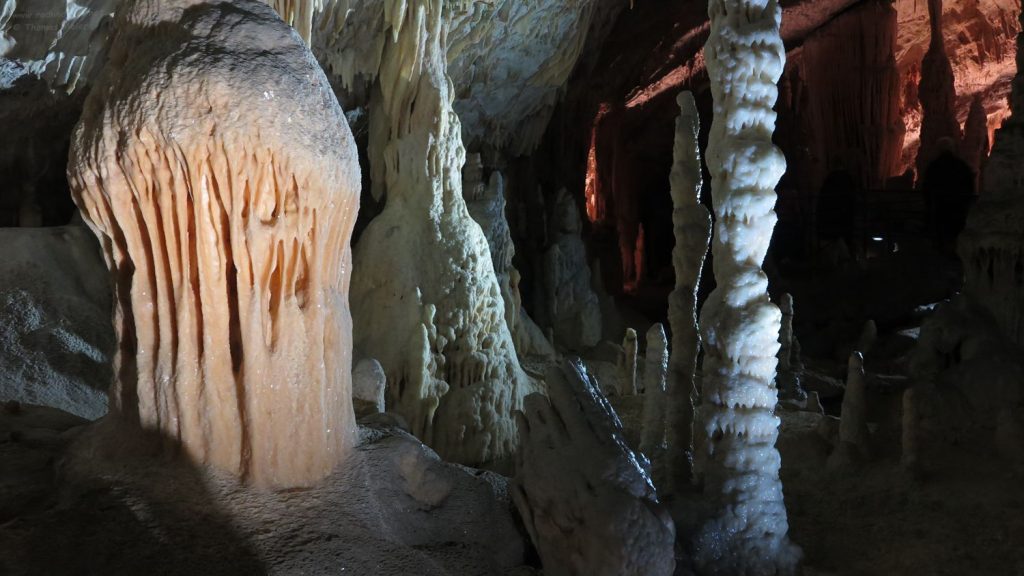 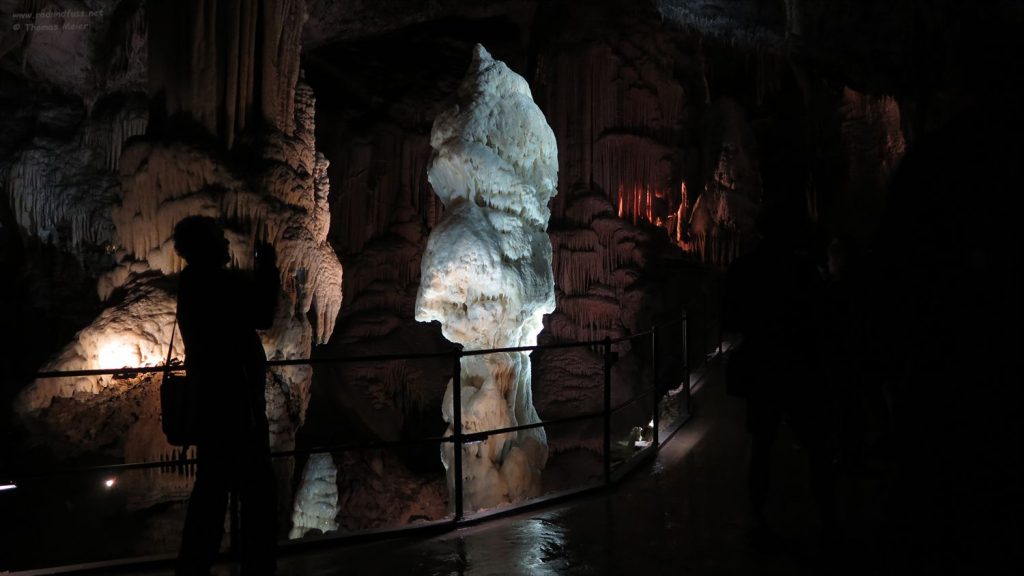 Maja organized an overnight stay with her cousin Itzok in Postojna, whom I now meet. Itzok is an architect and builds roofs, among other things. Roofs? I always thought architects also build everything underneath? Of course he does, but the story of roofs is a charity project that he started after an earthquake in Slovenia in 1998 and that has meanwhile taken him to Vietnam and Uganda, among other places. In the evening I am also warmly welcomed by his wife Nataša and bombarded with questions by her daughter Hanna – Papa has to translate. She also brings out the globe to see where I came from. Anyway, it will be a very entertaining evening!