Why did I want to go to Mureck yesterday? There is another ship mill here. Or better said: again. It was built in 1997, true to the original and functional. It is therefore advertised as “the only floating and functioning mill in Central Europe in traditional construction”. What is so special about it? Ship mills are basically floating mills. Firmly moored to the land, the entire mill technology lies on the “ship”, which is more of a pontoon, perhaps a houseboat. As long as water flows, the mill can grind! And today water flows abundantly on the already wide Mur. Yesterday evening there were still violent thunderstorms – which is why I visit the mill only today – even if only around Mureck. Here it remained with rain-free lightning and thunder spectacles. 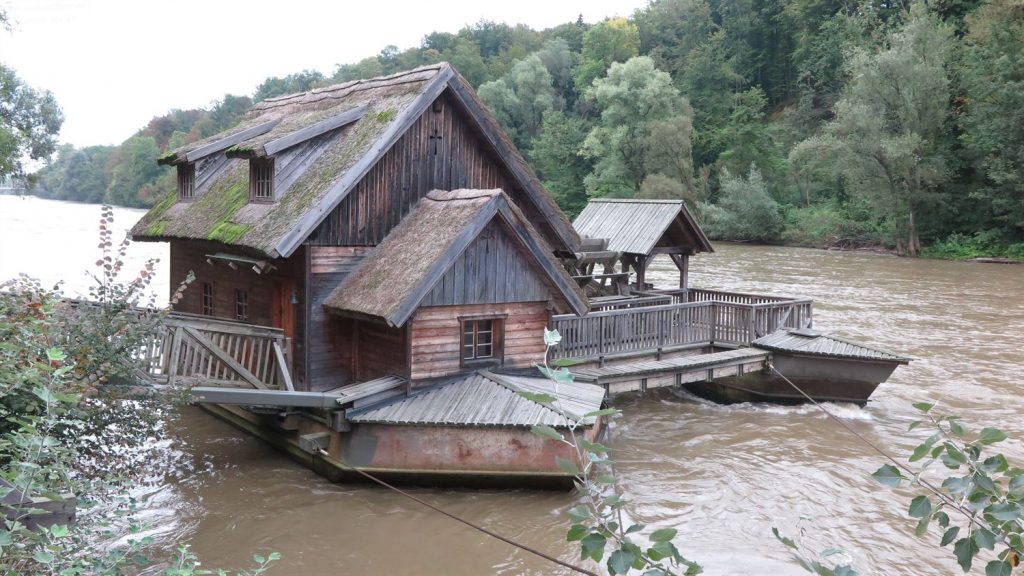 The ship mill in Mureck

My last hour in Austria sees me cycling up the Mur to the west. Over there is already Slovenia. By the way, this is a very friendly area. Everyone greets who comes towards you. And there are quite a lot of people coming towards you on a Saturday morning on the Murtal cycle path!

And then: Slovenia. No country sign, no welcome. Only the traffic rules are suddenly displayed. Also no more Eurovelo signs, instead “cycle path no. 1” (which doesn’t last long). Anyway, here the route stored in the navigation system is used again. Unfortunately, the first push distance comes also soon again. The Slovenian part of the Eurovelo is supposed to have an altitude difference of 6,000 metres. If they are all like this one, I won’t come to Croatia this month! 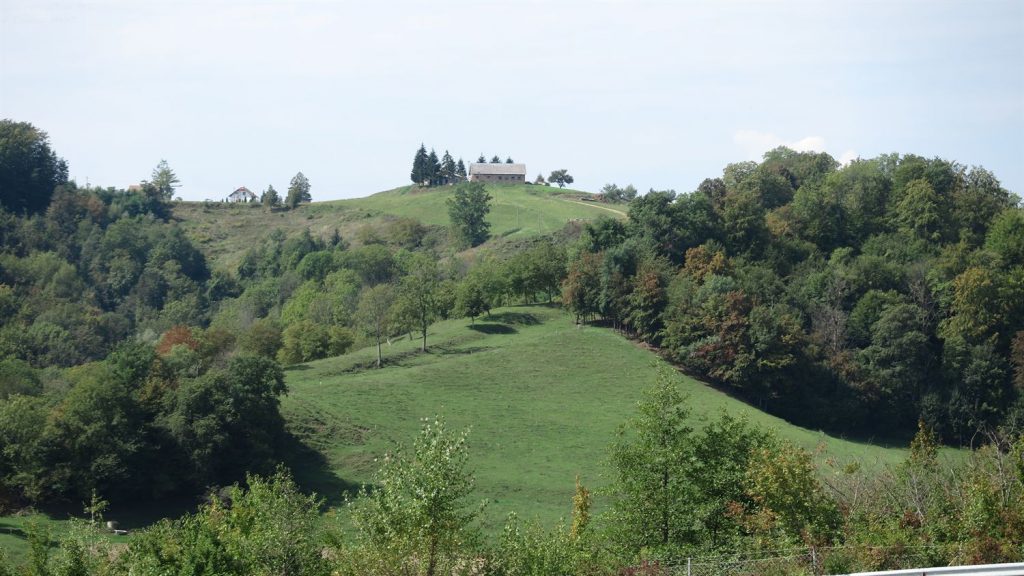 Somewhere between the border and Maribor.

Fortunately they are not. The rest of the day I still have to sweat, but I don’t have to descend anymore. In Maribor I have lunch. I have been hungry again for a long time anyway. In general I slowly develop into a hobbit: I could eat all the time. I’ve lost weight anyway on the tour, probably the reserves are now used up to such an extent that the body demands vehement replenishment! By the way, Slovenia seems to be a cheap travel destination when compared to the comparable currency for bicycle tours: the cappuccino is much cheaper than in Austria. But the prices in the supermarket don’t look much different! Maribor reminds me with its rectangular main place and the plague column somehow of the Bohemian small towns at the upper part of the Elbe, while Austria still lies in between. But here as there once the Habsburgs ruled and possibly also left traces of urban development. 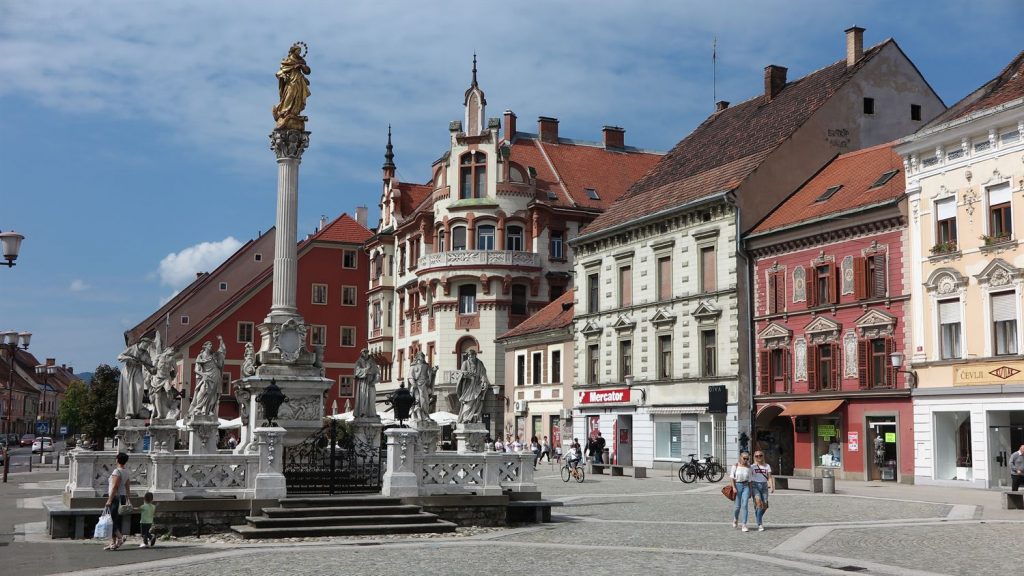 The main square (Glavni trg) with the plague column 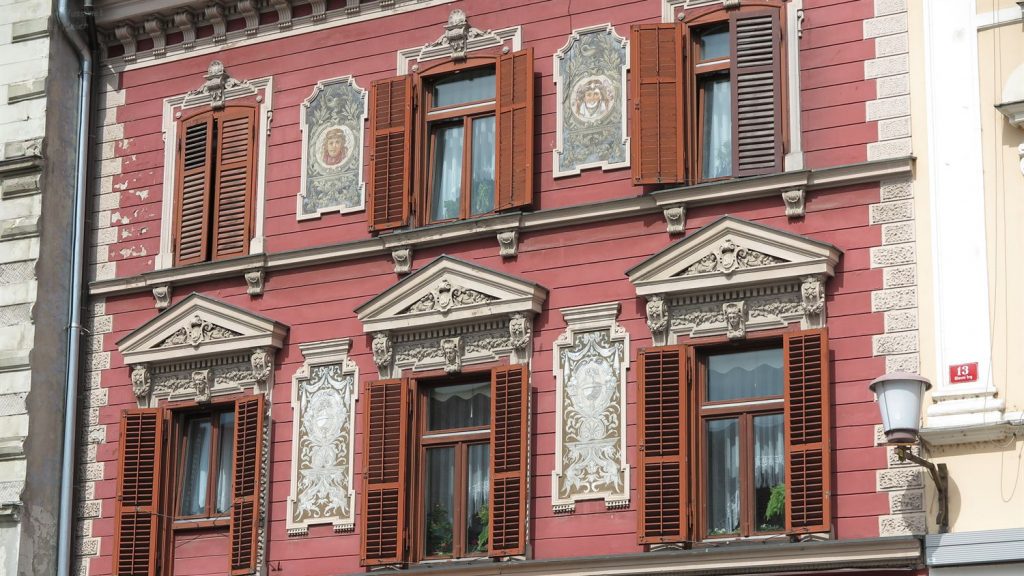 Facade at the main square

I now drive through a wide plain – without climbing, yeah! – but towards some higher mountains, over which I probably don’t have to cross. They are the easternmost Karawanken summits, which I circumvent southeast. Today I stay in Slovenska Bistrica, where I am greeted by a martial monument on a small town square: a heroic fighter with a hand grenade in his hand, ready to throw. Somehow I can’t understand some monument ideas with the best will in the world! 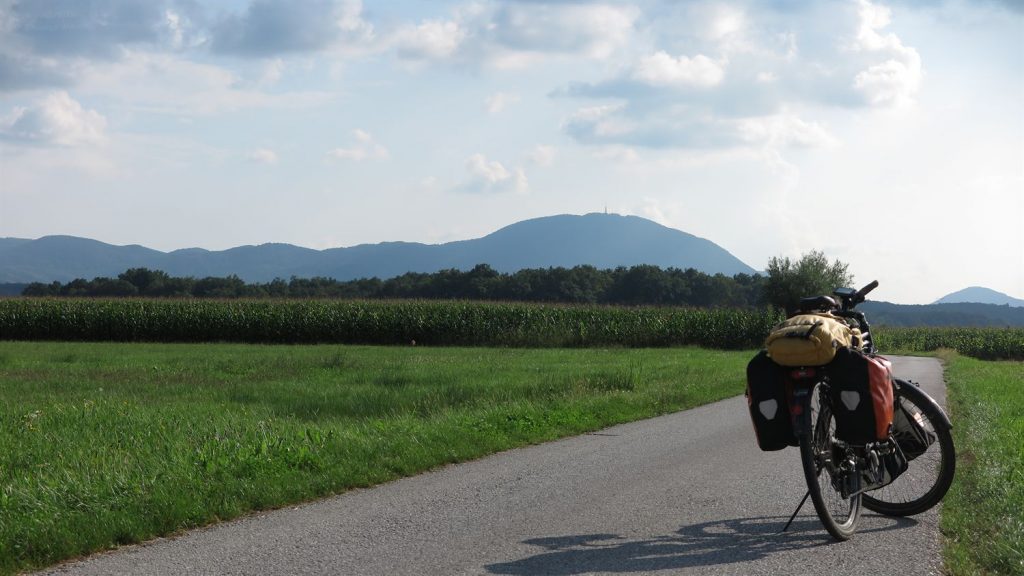 The eastern Karavanke Mountains ahead 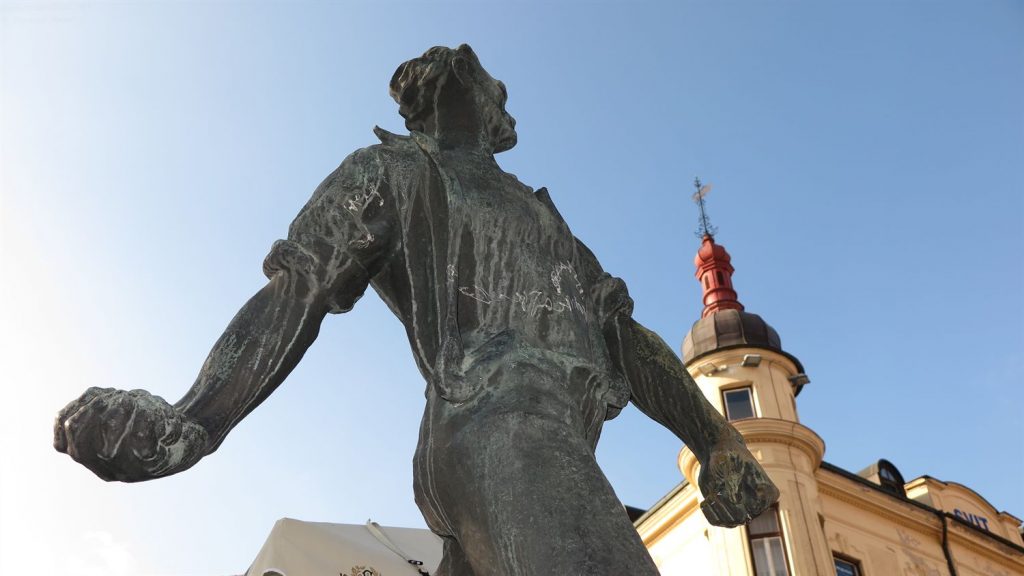